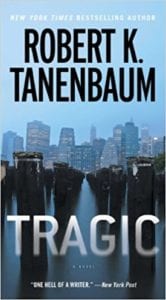 In the 25th installment of Robert K.Tanenbaum’s excellent series featuring Roger “Butch” Karp and wife Marlene, the readers will be anxious to sit down for a great one-day read.

Karp is the District Attorney for the County of New York and is zeroing in on union politics. When the President of the North American Brotherhood of Stevedores, Leo Corcione, passes on he leaves two prospective heirs to the throne; Charlie Vitteli, a ruthless, crooked individual and Vince Carlotta, who is a hard working, upstanding man who has only the men in the Union on his mind and in his heart. Vitteli’s head thug, Joey Barros, kills Carlotta after a meeting of the two men who wish to run the Union. In steps DA Karp, who is determined to make sure that Vitteli is convicted for the killing of Carlotta even though he didn’t pull the trigger. However, proving this will be difficult.

DA Karp and his wife, Marlene Ciampi, are brought into the case originally by a friend of Marlene’s who is the director of the East Village Women’s Shelter. Marlene is counseling an abused girl at the Shelter whose boyfriend might be one of the individuals who were hired to kill Carlotta. Marlene is on the hunt and follows leads that take her to three men who were contracted to hit Carlotta. Karp is also trying very hard to connect them to Vitteli and be able to prove in court that they were hired by Vitteli to kill his rival.

The author, who is a criminal lawyer, writes the scenes brilliantly and there are a lot of courtroom scenes that take some time but are really necessary to the story. The cast of characters are great including lowbrows who do all the dirty work for the Union big shots, the big shots themselves and the good guys, including the police and the union members who are not always looking out for themselves. In the prologue and epilogue, which take place after the trial is over, Butch and Marlene take their teen-age twin sons to a performance of Macbeth in Central Park. There are many references to the play and the case in the plotlines; the story even contains the three witches.