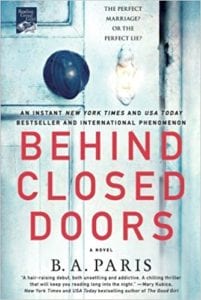 A mere eighteen months ago, Grace Harrington, a fruit buyer for Harrods store, and her younger sister Millie, who has Down’s Syndrome, met Jack Angel in a park. Millie and Jack shared a dance and Grace was immediately smitten. Jack was a strikingly handsome lawyer, and like his namesake, a perfect angel who defended battered women from their abusive husbands. He had never lost a case, and Jack’s charismatic, gentlemanly behavior quickly won the heart of Grace, thus beginning a whirlwind romance that culminated in marriage. Grace believed she had the perfect life and was delighted that Jack was her husband and wanted to eventually move Millie into their home. As time goes by, the reader gets glimpses of a completely wonderful marriage filled with inseparable love, wealth and happiness and, at the same time, strange cracks in the relationship are artfully revealed making readers wonder if everything is truly as perfect as Grace and Jack portray to the world.

Each fast-paced chapter in Behind Closed Doors is written in Grace’s voice and switches back and forth from the past to the present. Novels which time-travel in this manner often confuse readers, however, in this story it only enhances the suspense, leaving the reader hanging on the edge of their seat, while the author explains what events have occurred to lead into the breathlessly scary present. The two main characters, Grace and Jack, are so well-developed that readers easily get swept up into the story, feeling every bit of the terror that Grace experiences, which at first leaks out in a trickle, and then rushes in like a flood, while Jack cunningly hooks readers in with his charm and slaughters this facade with the shocking reality that he isn't exactly the wonderful man he portrays himself as being to the rest of the world.

Readers may be somewhat disappointed with the ending because it feels a bit rushed. After being provided a detailed blood-chilling, horrific and claustrophobic feeling throughout the book, there is a desire for an equally dreadful and justified ending, which is not completely provided. Perhaps even an epilogue could provide more closure for everyone who has taken this thrilling ride into the horrors of the marriage between Grace and Jack. However, this should not dissuade readers into skipping Behind Closed Doors. On the contrary, it is a recommended read that goes beyond a mere fictional story and peers into what can occur in real life domestic violence situations.

Quill says: B. A. Paris’ debut novel is a tremendous psychological thriller that is destined to be featured on the big screen.