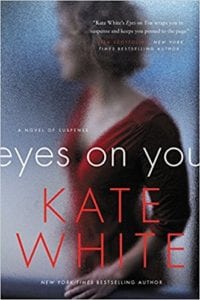 The word ‘sharp’ is always used when it comes to this amazing author’s writing, and this new roller-coaster thriller is no exception. In fact, like a great wine, it seems that Kate White’s writing is aging to perfection.

This tale surrounds a definite career woman working in a truly glamorous, not to mention, backbiting and mean, business. Robin Trainer has dealt with some pretty serious issues to re-enter that job market; from a divorce that practically annihilated her to losing her on-air job after dealing with multiple attacks from an unknown colleague. But Kate has risen above all that. She knows this is the dog-eat-dog-world of the media, and the personalities are hit just as hard as the subjects they’re covering.

This time around, however, Robin is not only back, she’s a true star. Working as cohost of a nightly entertainment program that is huge as far as popularity is concerned, Robin can also add ‘hot new writer’ to her resume because of the bestselling novel that she penned, selling to the masses in droves. In other words, Robin’s future is certainly looking sunny. So what happens when everything is going right? Exactly. And when things begin to go wrong for Robin, they go from bad to worse fairly quickly.

Robin has rivals; after all, if you’re going to be hot in the industry you are going to meet up with others climbing the ladder and using you as one of the rungs. But there is a difference between rivalry and downright evil – which is what Robin soon faces. Dolls with eyes gouged out, threatening notes placed in her own handbag – Robin is dealing with far more than just an up-and-comer who wants to make it on television. In fact, as things worsen, it looks like the predator may just be someone she works closely with...causing far more than just sleep to be lost. If the rival meets their goal, Robin has a very good shot at not only losing her newfound career, but also her life.

Again...intelligence, twists, turns, fast-paced action, and the feeling that the author knows everything regarding the topic she is speaking about to her readers. Kate White has put forward a character that is believable and able to be challenged and supported by fans, and the ending is one that you will not see coming!

Quill says: Kate White suspense can NOT be missed!