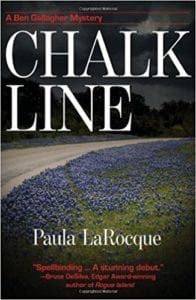 Ben Gallagher is the Chief of Detectives in the Dallas Police Department. Ben is not your usual police detective. He is very young, handsome and an artist to boot. Ben is also an heir to a family fortune that will keep him in food and shelter for many years to come. He lost his father in the Vietnam War and his younger brother has been incarcerated in Huntsville Prison, in Texas for ten years due to a college prank that turned bad. Ben is devoted to the law and sees everything in shades of black and white (no grey areas). As the story opens, Andrew (Ben's brother) is paroled and Ben has picked him up and taken him back to their mother's home for a celebration to toast Andrew's new life.

Shortly after arriving the two men find the body of their friend Dayton Slaughter, the family lawyer and a second father to them both. Also, he just happens to be the man their mother was about to marry. The body is found in Ben's house so his superiors take Ben off the case because Dayton is a family friend and Ben is too close to the investigation. This decision is a hard one for him to follow. Ben, contrary to his personality, is breaking rules right and left to try and answer some hard questions about his own family, as he is afraid that a family member is involved. Torn between loyalty to his family and his job, he races to find the killer before he has to abandon the case.

The final solution to the case will make Ben think about considering some of the shades of grey that he always discounted. Ben's loyalty is definitely called into account as he is pulled into some sticky situations while trying to work on Dayton's case. What and who he has always counted on for help and advice just might not work any more.

This is a mystery that will thrill the reader, written by a fairly new talent in the mystery field. The story offers many twists and turns in the plot to keep readers awake all night, if need be, flipping pages until you reach the end.

Quill Says: Chalk Line is a fascinating whodunit that will keep readers busy changing their minds about the killer. The author knows how to grasp the meaning of family vs. job and family vs. law. A great read and this reviewer is looking forward to the next book in this series.