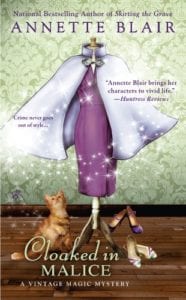 No designer vintage clothing shop would be complete without a resident specter, especially one housed in a former funeral home. Dante, a “renowned rake” in his day, enjoyed being the token ghost in Madeira Cutler’s shop, Vintage Magic. Maddie, who was psychically gifted, welcomed the company, but when an unusual young woman crossed the threshold of her shop, she needed to focus. Dante was taken aback when he saw a striking resemblance between Paisley Skye and his earthly love, Dolly Sweet. Paisley was enamored with the vintage clothing in Maddie’s shop and brought several pieces of her own in search of answers. Could they hold clues to her past, to her identity?

Little did Maddie know that her psychometric gift of reading clothes would plunge her into a world of horror when she touched a small child’s cloak. Her gift, “bestowed by a universe that decides which significant events” she would envision, brought her back through time into the body of a tiny, helpless child. The little girl’s daddy lay before her as his life’s blood began to color the snow with its crimson dye. A man’s hand reached toward her, but then Maddie’s vision unexpectedly ended, leaving her startled and uneasy. Dolly Sweet too was somehow frightened by the mere sight of Paisley and quickly disappeared from Mystic without telling a soul.

Paisley began to tell a strange, fragmented tale of her childhood with her Mam and Pap on a secluded island. Disjointed memories of an electric fence surrounding the house, her Bepah, and a so-called Dogpatch Cemetery were haunting. She had come to Mystic after her escape from the island, only carrying a few items of vintage clothing and a photograph. Maddie knew from her vision that she had a possible murder and kidnapping on her hands. Her boyfriend, Special Agent Nick Jaconetti, had helped her before, but this mystery was particularly unsettling. There was a “psychic knowledge” surrounding Paisley that unnerved Maddie. It later became apparent that the only clues to Paisley’s identity and the mystery would be literally found in the graves on a little-known island. Why had Paisley come into Vintage Magic looking for answers?

This action-packed paranormal thriller will keep the reader glued to the pages. The theme of a psychic who literally reads the threads of clothing was quite unusual and fascinating. The story exploded into one of international intrigue, well beyond the confines of Vintage Magic, into a mysterious tale replete with a film noire aura. Paisley, who had the air of a little lost princess, was the mysterious thread woven into the tapestry of this mystery. Maddie, a capable sleuth in her own right, was unduly powerful with boyfriend, Nick Jaconetti, and Detective Lytton Werner on board. If you’re up for an explosive paranormal cozy, Madeira Cutler will take you on one heck of a roller coaster ride!

Quill says: If you like your cozy mysteries filled with intrigue and touched by the paranormal, Cloaked in Malice will take you into a world you'd never imagine existed!