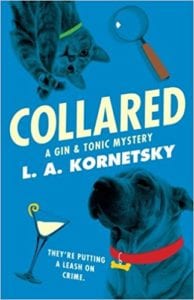 In Collared: A Gin & Tonic Mystery, L.A. Kornetsky has taken the classic Sam Spade detective premise and given it a 21st century update.

Ginny Mallard, ‘Gin,’ is a regular customer at Mary’s Bar. Bartender, Teddy Tonica, ‘Tonic,’ is a seasoned ‘social chemist’ and knows how to blend the perfect cocktail. What neither knew about the other was their lives were about to take on a whole new meaning of adventure on one not-so-typical and drizzly Seattle night when Walter ‘DubJay’ Jacobs enters the bar.

Gin was supposed to meet a new client at Mary’s; a client who would tide over the threat of bill collectors if she could sign the deal. She ran a Concierge service—emphasis on the concierge part because she was more than an assistant. Granted, some of her clients were a little eclectic; like the one who wanted nothing to do with taking an ailing aunt to the hospital because she was too cantankerous for blood relations to deal with. Maybe there was some perfect birthday party planning for a five year-old; whatever paid the bills… Tonic is the quintessential bartender. He pours a mean cocktail and lends an accomplished and sympathetic bartender’s ear. He has a following and his patronage knows their drink comes with a little sound and free advice; all they have to do is ask.

It is when Gin’s ‘no-show’ client is replaced with the appearance of DubJay and she is presented with a proposition for two times her normal pay, she is more than a little intrigued by the offer. There is no way that fish on the end of her prospect line is getting away before she secures it in her net and more importantly, a check. DubJay’s uncle, Joe Jacobs, is missing. All he wants Gin to do is find him. Of course, her annoying woman’s intuition tries to intervene, but the fact the pay was double seemed enough cause for her to snub those doubts out once and for all. Besides, how hard would it be to find DubJay’s uncle; easy money, right?

Behind the scenes, there are two four-legged detectives up for the challenge as well; Gin’s shar-pei, Georgie and Mary’s alley cat mascot, a grey tabby named Penny and while unclaimed, it’s pretty clear she has long-since adopted Tonic. Unbeknownst to Gin or Tonic, Georgie and Penny are on the case and as committed as their owners to solving the mystery of the disappearance of Uncle Joe.

Through a series of clues, intrigue, imminent danger and redirects, the plot is cohesive. Ms. Kornetsky uses a great balance of entertaining wit in her novel. Lines such as: ‘He could see the thoughts going across her face: that was the thing about Ginny, she was so used to working behind a computer screen, she’d never learned to hide her thoughts. The woman shouldn’t be allowed within ten feet of a poker table, ever…’ were infused at just the right moment to conjure a chuckle from the reader. However, she was reserved and savvy not to overstate the humor—a sign that she is in command of her story and uses this approach to show her reader rather than tell in opportune moments. It is clear from the onset of Collared: A Gin & Tonic Mystery that Ms. Kornetsky had a clear vision of where she intended to not only lead her reader, but direct the story as well. She was reserved and imposed a natural flow rather than a race to the finish at the behest of a ‘forced pen.’ I give her great props for knowing her audience well and delivering a witty and entertaining detective adventure. Hopefully, this is the first of a series of Gin and Tonic tales. I certainly hope this is the case.

Quill Says: There’s a lot more entertainment to ‘Gin and Tonic’ than a wedge of lime.