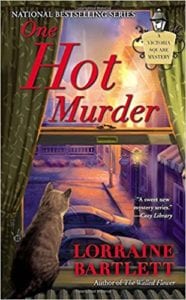 If Katie Bonner’s late husband, Chad, hadn’t invested in such a money pit, she wouldn’t be so hot under the collar. Between Artisans Alley’s faulty HVAC system and her “cranky vendors” she was hotter than steamed dim sum in a bamboo steamer. Living over Andy Rust’s pizzeria in an apartment with faulty AC was causing even more friction between the two of them. When Katie let her mind wander to Webster Mansion, the dream of her fantasy English Ivy Inn soothed her soul. McKinlay Mill’s Victoria Square would soon be the scene of an unusual fire that would turn the town upside down. Katie chanced to glance out the window at the Webster, only to see an strange glow in the sky.

“Andy,” she screamed, “the Square’s on fire--the Square’s on fire!” It was Dennis Wheeler’s store, the Wood U, but Katie hoped that because there was more smoke than flame the firefighter’s just might be able to save it. Naturally any “rubbernecker” within running distance was on the scene, practically before the fire department. Gilda Ringwald-Stratton was going to call the Wheelers to let them know about the fire, but maybe Dennis wasn’t at home. “Better send for the meat wagon,” the fire chief declared, “We found a body inside.” An unusually chipper Detective Ray Davenport later showed up at the Square asking Katie for her opinion on the purported murder. Huh?

Apparently the victim had been shot and, claimed Davenport, the “damage to the victim’s face was too great for a visual ID.” With the upcoming potluck dinner, problems with her vendors, and barely holding on financially, the last thing she needed was to be chummy with Davenport. On the other hand, it could be convenient to have the man at her beck and call for once. Things quickly started to become weirder looking than the wart on Ida Mitchell’s face, to say nothing of the devastating blow to her ego when Webster Mansion was sold. Dennis had sold the Wood U before he died, someone was pilfering food out of the Artisan’s fridge, and it looked like someone was hiding out in the Chad’s Pad. Who, what, and where was all this mess going to lead Katie to this time?

Once again, Lorraine Bartlett has penned a hot cozy mystery. I love the way Katie Bonner, even when things go crazy, is somehow able to manage everything with aplomb. Even Godfrey Foster, a nervous nellie of a vendor, who creates “faux renditions of the masters’ classic paintings” in “colored dryer lint” can’t get her derailed. The hint of her possibly moving beyond Chad thinking that she might be able to love again bodes well for a future serious romance in the series. Her solid friendships with people like Seth Landers continue while other characters are introduced. Her indefatigable hope for one day owning that English Ivy Inn ... well maybe it will happen. I hope!