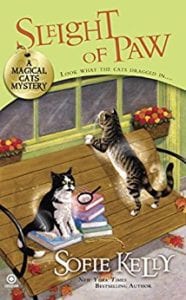 Librarian Kathleen Paulson is at it again – solving a murder mystery with the help of her magical cats Hercules and Owen. In this tale, she finds herself searching for the killer of sweet, elderly Agatha Shepherd, a woman who had once been the town’s school principal and it seems, helped just about everybody in town keep on the straight and narrow.

When Agatha’s body is found in an alley, Kathleen is certain that her death wasn’t natural. There’s the odd placement of the body and of course, that blood on her jacket was suspicious. The police are called and Kathleen assumes that that will be the last of her involvement. But when Kathleen heads over to her office at the library and finds a shard of glass in her pant cuff, she suspects that the glass could be related to Agatha's death. How did the glass get in her pant cuff? She did bend down over the body to check for a pulse so maybe she inadvertently picked up a clue. Kathleen calls her friend at police headquarters, Marcus Gordon, to turn over the possible evidence. Again, Kathleen thinks that’s the last of her involvement in the case.

While not officially “on the case,” Kathleen suspects that Harry Taylor, an elderly gentleman seen arguing with Agatha shortly before her death might be the murderer. But when he practically faints when he overhears mention of Agatha’s death, Kathleen has her doubts. Will her magical cats, Owen and Hercules, be able to help her solve this case?

Sleight of Paw is exactly what a cozy mystery should be - fun, full of twists and turns and dead ends, and with very little violence. Told in the first person by Kathleen, the story moves fairly quickly. While there are a few spots where the plot starts to drag as the main characters have yet another get-together at the local cafe or head up to Wisteria Hill to feed the feral cats, overall it was a very enjoyable read. Additionally, there's Hercules and Owen to add humor, a certain "aaahhh" factor, and magical mystery. While some may find the cats' abilities (going through doors, disappearing, and an almost human understanding of events, a bit of a stretch), for those willing to suspend belief, the cats are the best part of the story.

It should be noted that there were a fair number of typos in the text ("...it is possible for human beings have two left feet" (pg. 134), "it was time to talk to third to the third person..." (pg. 205)), which is rather surprising for a mainstream publisher. But look beyond the typos and enjoy the cats!

Quill says: Curl up with your kitties and get lost in another magical cats mystery.