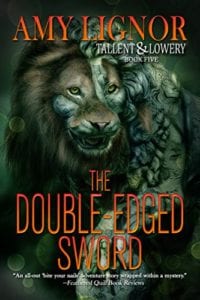 Everything and everyone has an opposite - good versus evil, yin and yang, God against Satan. And in book 5 of the popular Tallent and Lowery series, heroine Leah Tallent (one of my favorite characters in an adventure series bar none) is about to find out where she stands in her own personal battle between good and evil.

When we last saw Leah Tallent and Gareth Lowery in book 4, The Charlatan's Crown, they were battling Daniel Bauer, the Australian fortune hunter they met in a previous adventure. Bauer had done everything in his power to make life unbearable for Leah and Gareth as he tried to use Leah's special skills to hunt for artifacts that he needed for some nefarious purposes. In book 4, they were all in a race to find a very special emerald that, once added to a powerful crown, would give the bearer powers beyond imagination. As the story winds to an end, Leah and Gareth barely escape with their lives. And the reader is left wondering what happens next...

When The Double-Edged Sword opens, Leah and Gareth are in Bergama, Turkey, exploring the ancient ruins of Pergamon. While Pergamon is known by some as "Satan's Dwelling," Leah and Gareth don't let that stop them. They are there because they had recently found a photo of Gareth's father with a handwritten "Pergamon 2009" on the back. The problem is, Gareth's father and mother reportedly died many years earlier in a car accident. If the handwritten inscription were true, then how could his father have died? Might he, and Gareth's mother, actually be alive? Might they have been caught up in the fight between good and evil, much like Leah's mother, Neith? Perhaps Daniel Bauer, or Michael Hansen, another power-obsessed psychotic we met in an earlier story, forced the couple to help in their search for the all-powerful crown. At Pergamon, Leah and Gareth hope to find clues to Gareth's parents whereabouts, if, indeed, they are still alive.

Leah and Gareth discover some pretty cool things while at Pergamon (no spoilers here although a river of mercury does stand out), and those discoveries lead them all the way to Crete, the largest island in Greece. It is here that knowledge of Minoan history is going to come in handy if Leah and Gareth are going to be able to save themselves and others. King Minos and the legend of the Minotaur, as well as the famous labyrinth where the Minotaur reportedly lived, come into play and the action reaches a fever pitch in that labyrinth.

The Double-Edged Sword is an all-out "bite your nails" adventure story wrapped within a mystery with just enough historical facts inserted to make everything seem plausible. Many of the places and artifacts the author uses do exist, and the reader will be hard pressed to know where fact stops and fiction begins. As with all the books in this series, the dialog between characters is sharp and animated, and truly brings the story to life. Leah has a very difficult decision to make that will test her relationship with Gareth and her choice may just decide whether or not the couple survives. Pages will be turning quickly as Leah struggles with her choices.

I have read all the books in the Tallent & Lowery series and must say that they keep getting better and better. Each story builds on the last and I would suggest that you start with the first book, 13, to get the full range of enjoyment from this series. With just one more book to go in this fantastic series, the action and cliffhanger ending in The Double-Edged Sword will leave readers hankering for that last book, to see how this epic fight between good and evil ends...