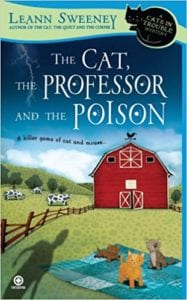 Jillian Hart had finally begun to settle into Mercy, South Carolina quite nicely and had made a friend in Deputy Candace Carson. Making a friend while hovering over Flake Wilkerson’s corpse wasn’t exactly like meeting one in Belle’s Beans over a cup of coffee, but hey . . . whatever works. Belle’s was a “hotbed of Mercy gossip” and all the news that was fit to cross anyone’s lips was more than likely uttered over a cup of java or in the produce department at the Piggly Wiggly. Aside from a few juicy tidbits, including the arrival of her stepdaughter, Kara, there wasn’t much to report since Flake’s demise some time ago. The only stiff in town lately was Deputy Coroner Lydia Monk. She obviously had taken out stock in a volumizing hair spray by the look of that teased blond hair and she definitely needed those 38D implants to hold everything up.

Lydia was all bent out of shape because she thought Jillian was some kind of man-eater and was chasing Tom Stewart, her latest paramour. Jillian was a widow and the only things that mattered in her life were her three cats, Syrah, Merlot, Chablis and her quilting business sewing cat quilts. It was truly relaxing to be able to enjoy her babies and the company of her new friend, without of course, a corpse getting in the way. Candace’s sole ambition in life was to be a “crime scene investigator.” Show that gal a thread, a piece of hair or a foot print and she’d have an “evidence obsession seizure” before you could bat an eye. Robin, “the most overprotective mother in Mercy,” soon shattered the two women’s peaceful evening with a call. “We’re gonna see a woman about a cow.” Now what?

Harriet, Robin’s cow, was missing, but cats and kittens were showing up in droves. The most obvious suspect was that nutty Professor Hubert VanKleet. Candace wasn’t the only one who had a “constant love affair with anything criminal” and Jillian was shocked at what she saw at his farm on her sleuthing adventure. Candace stumbled out of VanKleet’s house, fell to her knees and began to retch. The professor looked like a twisted up Gumby. There were cats, cats, and more cats, with yet another cat soon to arrive . . . Ms. Monk. Add to the mix Rufus Bower, owner of “What’s Bugging You,” who was a “whacked on the head” kind of corpse. Jillian and Candace seemed to attract dead bodies like black polyester pants attract lint and cat hair, but this was insane. “If it isn’t Cagney and Lacey . . . ” Lydia had arrived and the gossip mill would soon be in full force!

This is the second installment of the “Cats in Trouble Mystery” series, one that is sure to please the cat and cozy fans of the world. I loved Leann’s quirky and cute sense of humor and, by default, learned many interesting things about cats, including some about the human persuasion. This chemistry between the characters is beginning to gel nicely and the introduction of new characters is seamless. After reading the first book, I just knew I was going to fall in love with this series and have. I was like a young girl again reading this book. I giggled, smiled, guffawed, and my eyes widened trying to figure out whodunit. I’ve already conveniently forgotten, so you won’t find any spoilers here . . . you’ll just have to read the book!

Quill says: If you are a cat lover and enjoy an entertaining whodunit, this cozy series is one you won't be able to put down!