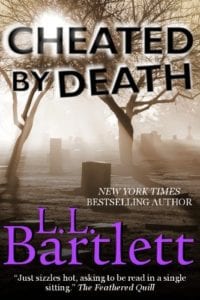 A few short months before, Jeff Resnick thought he had been an orphan. Sometimes he wished he still was, except perhaps for his half brother Richard. Dr. Richard Alpert if you wanted to get technical. He lived in a carriage house apartment on his property and had no complaints about living there. Richard and his wife Brenda were, well, as good as you’re going to get for relatives. Headaches from a mugging that landed him in the hospital with a broken arm, a skull fracture that resulted in Richard getting shot, but that was all behind them now. What lay ahead seemed equally unsavory.

His father, Chester Resnick, just came out of the woodwork only to dredge up “thirty-two years of submerged anger.” And the dying old geezer with a cannula up his nose brought along a sister who may as well have had b-i-m-b-o written on her forehead. When she asked Jeff why Richard married that jiga . . . she didn’t even have to finish that question before he want to hurl. He was psychic, but he could sense trash without even having to get within an inch of that broad. Lord knows, he’d seen enough of that sort at “The Whole Nine Yards,” the neighborhood sports bar he worked at. There were no “nuclear scientists” on that side of the family for sure. Why didn’t they just go away?

Jeff had his “share of peeing in soup cans” when he worked as a field agent for an insurance agency. He could sense that a deadly situation was coming on board quickly, but he wasn’t quite sure what it was. He kept dreaming about his murdered ex, Shelley. It wasn’t just her. There wasn’t just one death, but “three unconnected deaths,” that somehow had to connect, but how? Brenda was a nurse at the “Williamsville Women’s Health Center” and things were starting to heat up like no tomorrow there. The nuts were coming out of the woodwork at that joint, including her ex Willie Morgan and macadamia nuts like Mr. Robert Linden, “Head of the Erie County Assembly of Life.” With all his psychic ability, Resnick couldn’t manage to connect three dots.

Then the letters began to arrive. No one showed them to Brenda because she’d flip. The first one said “YOU.” The second one said “WILL.” The third was a given. Things began to heat up quickly, but who was sending those letters? Who was writing that crapola on windshields at the clinic? Willie began to act threateningly when he attacked Richard saying, “I know about rich folk like you. Think you can shove everyone around—take what you want. You got money and now you got my woman.” The dreams. The corpses. The protestors. A finger was being broken, an agonized scream rang out, and then Jeff began to connect those dots, but would he be able to get there in time before there was yet another corpse added to that dream?

This psychological thriller with a paranormal thread will keep the old wheels spinning trying to figure out the culprit. I’ve never read any books in this series, but this one can definitely stand alone. This tough, but somehow vulnerable psychic detective had just the right amount of edge to his personality to making him extremely appealing. Jeffrey Resnick was a loner whose clipped, slightly raucous demeanor, was the sort of guy who cares, but isn’t going to let anyone know. Well, perhaps the reader will figure that one out quickly enough.

Quill says: The reader won’t find the time to discover a “psychic signature” in the pages of this book because it just sizzles hot, asking to be read in a single sitting!