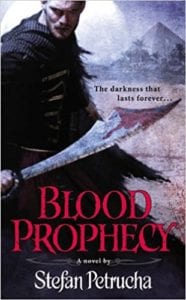 When opening the cover of a book, and the first thing a reader sees is a “thank you” to the creative people of Dark Shadows (the most awesome television show probably ever made), the reader automatically knows that: A) the author has fantastic taste; and, B) the book will most assuredly be unforgettable because said author has watched and learned from the best references ever made.

Our story begins in October of 1799. A man named Jeremiah is secluded in a prison cell; chained to the wall, with carcasses of rats lying in heaps on the cold, wet floor. The man doesn’t know how long he’s been stuck in this horrific place – that’s the point. It’s imperative that he know exactly what the date is in order to stop a seriously frightening event from taking place. As a ladder is thrown into the pit, a priest, a scholar, and French soldiers climb into the cell with Jeremiah and begin to study him; they are wondering how on earth a man could be without food and water for so long, and still look as healthy as the day he was first imprisoned. Through a variety of interesting scenes, Jeremiah makes a deal with the men. If they tell him what the date is, he will tell them his story and also advise them on what, exactly, is coming to destroy their world.

In 1644, in Massachusetts, Jeremiah and his father are plowing the fields with their trusty oxen. They are originally from the decks of the Mayflower that brought them to this New World, and they’re trying their best as colonists to work hard and get along with the rest of the townspeople. The Indians are also a part of this colorful world; living in the forests surrounding the town. When Jeremiah hits a strange mound in the middle of the field his calm, peaceful world turns upside down. A being that has never been seen by human eyes – a creature with what looks like huge, sharp fangs – leaps from the mound and kills Jeremiah’s father. After a hard-fought struggle later that very same evening, Jeremiah’s mother is also taken from him, and he ends up with a demon that he can literally hear breathing inside of him.

Many religious beliefs, as well as Indian knowledge and folklore, lead Jeremiah through an endless number of ancient places and mystical time periods. From King Phillip to Egypt; from the Ottoman Empire to Napoleon’s chambers – Jeremiah faces deadly challenges and horrific battles in order to come face to face with the artifact he desperately needs. This black stone stands over ten feet high and offers in its depths the ancient legend of man. If this information, encased in what is known as the Rosetta stone can be decoded, Jeremiah can very possibly be saved and turned back into the kind, loving human he once was. No matter what happens, Jeremiah knows he has to try to unlock the mystery. What he doesn’t know is what exactly he’ll be unleashing upon the world once he opens the stone’s secrets.

The historical and religious research that this author did is A-one; not to mention some of his characters are so interesting that they should definitely be in a Dark Shadows episode of their very own. Perhaps Johnny Depp and Tim Burton – the current amazing duo that’s re-creating that show into a movie – could use Mr. Petrucha on their team. One of my favorite characters in this story, oddly enough, is a horse. Like Silver, this horse offers Jeremiah its undying devotion throughout the book, and has within him a truly…magical quality.

Quill says: From the Native American legends to the fantastic King Arthur-like tales, this author has not only given readers an exciting adventure, but he’s also created a true learning experience. His imagination is certainly not surprising, considering this author was a writer of X-files comic books. There are many genres that have long been the fiction favorites among readers, like romance and mysteries, but when a writer takes the time to really delve into history and combine that research with the paranormal – that’s a recipe that makes a truly unforgettable story. Here’s one reader who hopes that the publishers out there recognize that this type of storytelling is most definitely what readers want to see on the bookshelves!