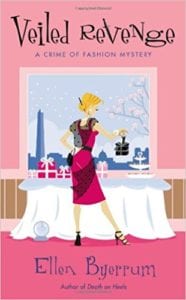 There was definitely not going to be anything tacky at Stella Lake's bachelorette party at Rosebud's. Maybe a bit of chip and dip, but no Chippendales. Class was of the utmost importance since Stella's future mother-in-law was Lady Gwendolyn Griffin, wife of a former British ambassador. Besides, she was crazy mad-dash in love with Nigel and anything that would remotely embarrass him was out. What was in, was Marie Largesse, a fortune-teller who would prove to be both the life and death of the party. "Mock the shawl and flirt with disaster," she crooned to her audience. Her fiancé, Gregor Kepelov, had given her the haunted shawl, a token of his family history.

Lacey Smithsonian was wowed by the shawl and Marie's psychic venture into the unknown, but when the Leonardo crashed the party she wasn't exactly feeling the love. The hairstylist grabbed the shawl and danced like there was no tomorrow (there wouldn't be). "You've done it now," Marie screeched, "you freaking diva!" Leonardo yelped and claimed the darn thing bit him. Oh, puh-lease! Monday morning found Stella at "The Eye" claiming Leo was dead. Kinda like deader than disco, but Lacey got the point. No doubt Detective Broadway Lamont would later show up and he did. "You're going to take the haunted shawl into custody, Lamont?" Lacey quipped 'n queried the cop, "Go medieval on it? Rough it up until it squeals?" Yeah, right.

Stella's pretty in pink wedding would be on permanent hold if Lacey couldn't get her histrionics under control. The "Curse of the Killer Shawl," a shawl that somehow went missing, was not the only thing on Lacey's mind. Vic Donovan wanted those wedding bells to ring for them, but no way would she upstage one of her best friend's memorable moments. Harlan Wiedemeyer, the staff's "death-and-dismemberment reporter," wanted the scoop, family embarrassments began to arrive, and a black Lincoln Town car speeding toward them threatened to turn the event into a funeral. "This is crazy, Nigel," Stella bawled, "It's the shawl. It's after us." Was there really a curse attached to that missing Russian artifact? Would Lacey be able to figure out what was going on before the killer shawl struck again?

Lacey Smithsonian has to pump up her EFP and put on her thinking cap when a Killer Shawl is on the loose. This amazing cozy mystery could be quite dignified one moment only to slip into a hilariously goofy spoof on its characters the next or get me humming the theme to a James Bond movie at the turn of a page. It was one of those really fun mysteries that kept me turning the pages, albeit slowly. It's the type I simply wanted to savor rather than race to the end. Although not the first in the series, its not overly complicated and can stand alone, hinting at characters and teasers that will encourage the reader to pick up the others. This is one killer female sleuth I fell in love with ... instantly!

Quill says: If you like your cozy mysteries fashionable and over-the-top funny, this is one series you'll adore!