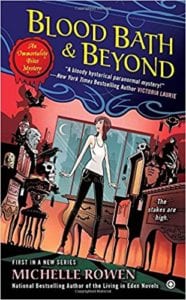 It really bites when your parents don’t approve of your fiancé, but admittedly when a May-December romance has a little gap of six hundred years or so it can be problematic. Sarah Dearly, a fledgling vampire and trouble magnet, was engaged to Thierry de Bennicoeur, a master vampire who was a consultant to the Ring, the vampire counsel. Mon dieu! It was a match made in vampire heaven. Not. Some of Thierry’s assignments could be lengthy, including an upcoming one in Las Vegas. Immortal or no, a fifty year separation was a bit much for Sarah and staying behind in Toronto, well, sucked and it wasn’t blood.

Sarah was elated when at the last minute Thierry agreed to let her go to Las Vegas with him. There was a vampire serial killer on the loose who was sucking the lifeblood out of people and leaving them in some very conspicuous places on the Strip. Then there was another little nightmarish problem named Victoria Corday who was a century-old vampire in child form. Vicky was entered in the Little Miss Platinum Vegas and, no doubt, made Mackenzie and her “ni-ni” look good. Vicky was tearing up Las Vegas with her pink Gummi-Boo teddy, belting out Reba McEntire tunes, and taking a few drags on her Marlboros. First things first so Sarah found a Vegas blood bank, Blood Bath and Beyond, where she could have a thirst-quenching drink of B-positive.

Vicky Corday alone was enough to make anyone drink, but when Sarah and Thierry first arrived at the hotel, they saw a man with unmistakable fang marks on his throat being taken out on a stretcher. The vampire attacks were increasing, but something more insidious would soon happen when Thierry encountered an old nemesis, Bernard DuShaw. They began to fight about cursed diamonds when a hunter attacked. DuShaw’s death didn’t come at Thierry’s hands, but undoubtedly he was doomed when he would feel Markus Reed’s silver stake go through his heart. Guilty as charged. Would Sarah be able to prove his innocence or would she have to die trying? “It’s a dangerous world for a fledgling who doesn’t know any better than to go places she shouldn’t be ...”

This is a fabulous start to a quirky and “Vampilicious” series that readers will adore. The quick start and unusually interesting, but odd topic of this cozy mystery quickly piqued my interest. The plot was fast-paced, inanely humorous at times, and the characters were fascinating, something that readers will love. There were many twists and turns in the mystery and the long history of some like Thierry brought some heavy baggage to the forefront. Sarah, in spite of her fledgling status and youth, was refreshingly candid and quite a tenacious sleuth. Nothing would keep her from saving her man! The writing was masterful as it intertwined the dark underworld of vampires with “real” life. If you like vampires, this cozy is one you can really sink your teeth into!