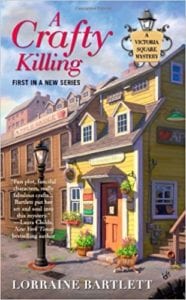 Katie Bonner had to admit that a corpse was good for business. Everyone and his brother would come rushing into Artisans Alley to see the spot where Ezra Hilton had been bludgeoned to death. It was a good thing that Mary Elliot had found the old coot because frankly, she didn’t have the stomach for that sort of thing even though “Artisans Alley—and Ezra—had ruined her marriage.” Her dearly departed hubby, Chad, had invested in this “decaying money pit,” and after his death she became Ezra’s partner. Every last one of the vendors in Artisans considered themselves to be an undiscovered artist, including Peter Ashby in number sixty-four who dealt in “garden statuary,” a quaint euphemism for cemetery statues. The ghouls would love his stuff.

After the “Did Mr. Hilton have any enemies?” bit was over Katie had to calm down, pop a peppermint, and get down to business. Things quickly started to hop and bop, including Ida Mitchell’s UGH-ly facial wart, one other thing Katie didn’t have the stomach for. Ida, who hadn’t paid her rent in months, was going to be the first one out the door of Artisans just as soon as she told her boss at Kimper Insurance where to get off. This was business and the very future of Artisans Alley and Victoria Square depended on her. Katie had her eye on a “sumptuous bed-and-breakfast,” but a dump that sold objects d’art would have to do. Vance Ingram, Ezra’s backup, began to squawk, “You’ve never shown any interest in this place. What makes you think you can just waltz in her and change everything now?” Try me.

Katie didn’t know whodunit, but soon she’d have to contend with more nuts than were in the cookies at Mary’s “Tea and Tasties.” Gerald Hilton, Ezra’s greedy nephew (and now partner), had his own ideas about running things. Pizza parlor Andy had a bunch of hoodlums for employees and the vendors were yelling about the “crappy crafters” she was letting in Artisans. Oh, and the ‘thank you ma’am man’ detective was telling her to mind her own business. Nosy Rose Nash said, “I can tell you about everything, about everybody in this place.” La di da, go right ahead because it was starting to look like an inside job until everyone got to Collier’s funeral parlor to pay their respects to Ezra and Nona Fiske began to scream. “Trollop! It’s your fault Ezra’s dead. If you hadn’t come to Victoria Square, Ezra would be alive today.”

This is a fabulously flamboyant start to a new series. For the first book in a series, I was quite impressed at how well Katie’s character was developed. She was gutsy, determined, spunky, and capable of getting the job done, including catching a killer. I loved the little touches of humor scattered throughout the book and fell in love with Katie’s no nonsense approach to life and the occasional corpse she had to deal with. If you read and enjoyed the Booktown Mystery series, also by the author (Lorna Barrett) you’re going to love graduating from one series to the other.

Quill says: It looks like Artisans Alley and Victoria Square are going to be a “high falutin’” hotbed … for murder!