A Traitor’s Loyalty: A Novel of International Intrigue 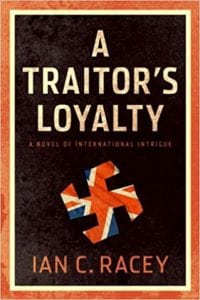 A Traitor's Loyalty: A Novel of International Intrigue

It is the summer of the year 1967. Twenty years have passed since the end of World War II where Germany was declared the victor. Simon Quinn, who was a master spy working for MI-6, is involved in a mission in Berlin with a spy who is trying to reach the gates of the British Embassy and from there to safety. The Gestapo is on the spy's trail and has finally caught up with him near the Embassy and as he is almost at the gates, he is shot and killed. No one knows if it was the Germans or the British that fired the fatal shot.

This is the prologue of this book wherein the German’s won the war. Beyond that, not very much has changed as they are still dictating how everyone should live. The time has now jumped ahead to 1971, and Hitler has just died. Now comes the fun and the conspiracy theories that will decide who will be the next leader of the Greater German Empire.

Simon Quinn, the spymaster, has since walked away from his career with MI-6 and is living his life in Greece, reasonably happy that he is no longer involved in espionage. But, of course, the British Intelligence Service blackmails him into coming back for one last mission. His mission will be to locate Richard Garner, a former British spy who has disappeared and may be defecting to Germany. It sort of reminds you of General Custer being told by the Army, “Just stand up one more time and then you can go home.”

Quinn, with the help of Ellie Voss, who works for the German High Command, a loyal German who is torn between loyalty to her country and dislike for some of the folks who are now running things. The two find Garner and learn the reason that he disappeared and all things change. They are now running from the Gestapo and MI-6. While all this intrigue is goind on, the Germans are vying for Hitler’s spot as head honcho of the government.

Quill Says: This is an interesting story and even though there have been some alternate history stories written in the past naming Germany as victorious in the war, this one is just different enough to make readers want to continue reading to see what happens. There are some surprises at the end that will keep you interested. A definite keeper!!!