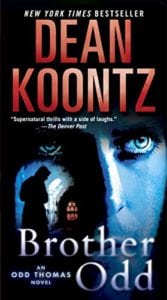 Brother Odd, the third book in the Odd Thomas series by Dean Koontz, takes the reader to the hills of the Sierra Mountains in northern California. Odd (whose strange name supposedly comes from an error on his birth certificate where the T was dropped from Todd) has come to St. Bartholomew’s Abbey to rejuvenate his soul after the horrific events of the past in which he lost his one true love. Thinking the quiet abbey will be the perfect place to rest, Odd is quickly thrown into the center of utter chaos.

Odd has the unique ability to see the lingering dead, those who, for whatever reason, have not left this world for the next. He also sees bodachs, ghostlike figures whose appearance indicates impending violence. When Odd discovers a bodach lurking outside the abbey, he sets out to find what might be attracting it. Is it after the peaceful sisters or brothers? Or perhaps the many physically and mentally challenged children who call St. Bart’s home? As more and more bodachs appear, Odd knows time is running out.

As a big Koontz fan, I was eager to read Brother Odd. I had recently read another of Koontz’s works, (The Darkest Evening of the Year) which had disappointed and I wanted to give one of my favorite authors another try. Fortunately, Brother Odd delivers all that Koontz fans expect – and more. Told in the first person, the reader comes to know Odd quite well. He is a likeable young man and one of Koontz’s best developed characters. The interactions he has with the sisters and brothers are well-written and many of these minor characters are also truly interesting people who add much to the story. I particularly enjoyed the relationship of Odd with Rodion Romanovich, a suspect turned partner, and how it evolved as the story unfolded. There are even a few ‘lingering dead’ minor characters who add charm and laughter to the story. When Elvis first appeared, I thought, ‘this is going too far,’ but Koontz handled the character with such levity that I soon found myself looking forward to the all too brief appearances by The King.

If you are looking for a good Dean Koontz story with the trademark twists and turns that this bestselling author is known for, then pick up a copy of Brother Odd. It is not necessary to read the previous two books in this series first, you’ll be up to speed instantly.

Quill says: Brother Odd takes the reader on a high-velocity ride through the world of the supernatural. Don’t miss it.