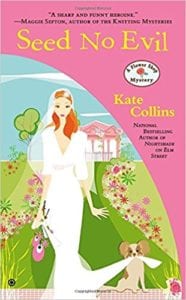 Abby and Marco were going to be married in just two unbelievably short weeks. Abigail Knight Salvare. It had a really nice ring to it, but in order to be able to spend more time together, Marco had to train his younger brother, Rafe, in a few management skills. No way could he manage Down the Hatch Bar and Grill and run his private investigation agency at the same time. Business at Abby's flower shop, Bloomers, was pretty dead, but that wouldn't be the only dead "thing" in New Chapel. PAR, Protecting Animals Rights was a big thing in Abby's life, but she had to hand over the reins to her mom, Maureen "Mad Mo" Knight, if Team Salvare were to succeed as private investigators. PAR's odd flip flop from a no-kill organization to a kill one was very disturbing. Very.

The importance of everyone attending the meeting was obvious, but when Mo was a no-show, Abby began to worry. A phone call from jail was even more worrisome. "It's Bev Powers," Mo tried to explain. "She's dead and I was the one who found her body." Huh? Bev, the director of PAR, had somehow been mauled by two dangerous red-zone dogs at the shelter while Mo was tending to the cats. An "in" with Sergeant Sean O'Reilly tuned Marco and Abby on to the fact that Powers not only had "multiple bite marks," but a "broken neck." The woman had enemies, but the secrets and lies seemed to bud like lilacs in springtime when Marco and Abby began to ask questions. Emma Hardy played coy, philanthropist Dayton Blaine was close-mouthed, and even Bev's sister, Stacy Shaw, couldn't manage to pump up a tear.

Everyone was backpedaling like crazy, but in order to find out whodunit and clear Mo, they'd have to work fast. Eighteen people had keys to the shelter and one of them pulled those two cords that set those red-zoned dogs on their murderous rampage. Abby and Marco had to deal with plenty of subterfuge, but the old relatives were no help. Cousin Jillian was in a pregnancy-induced nuttiness, Mo's creativity had taken a turn for the worse, and Francesca, Marco's mom, had designs on being a wedding planner ... theirs. One person was already dead and a shelter full of animals were slated to die, including lovable Seedy, if the murderer wasn't exposed. Would Abby be tossing a bouquet or tossing in the towel on this case?

Abby and Marco team up for their most interesting case to date. There are page turners and there are page turners. This is one that definitely kept my attention from the first page to the last. The excitement of the upcoming wedding took a back seat once the action started. Practically as soon as Bev's corpse hit the ground in that dog pen Team Salvare began their investigation, an investigation "real" PIs could learn a few hints from. There were light touches of humor with Mo and her creations and when Tara, Abby's teenage niece spouted out her words of wisdom. Aunt Abby learned from her that she could "badger people better than anyone in the family." This was a well-written and thoroughly entertaining cozy mystery. It had the best happy ending and launch into the next in the series ... like ever.

Quill says: This is a perfectly crafted cozy mystery that is almost too blooming good to be true!