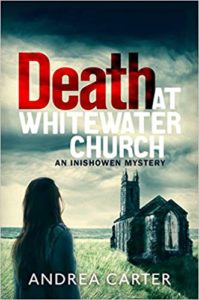 Benedicta ‘Ben’ O’Keeffe is a solicitor acting for the owners of a de-consecrated church in disrepair when she comes across a mysterious skeleton wrapped in a blanket hidden in the church’s crypt. The locals are convinced the skeleton must belong to Conor Devitt, a well-known neighbor who vanished six years before on his wedding day. Ben becomes embroiled in a mystery that has eaten away at her adopted community for over half a decade while simultaneously coming face to face with a past tragedy of her own. One that she would rather not dig up.

From the beginning of the novel, author Angela Carter draws the readers into the tight-knit town of Inishowen, rife with its secrets and dark history. She brilliantly captures the atmosphere of a small town where everybody knows everybody else’s business. Her writing style imbues the story with a chilliness that permeates far more than just setting, which is in itself both charming and spooky.

As the reader discovers the deep, sometimes surprising connections between the people of Inishowen alongside Ben, they can’t help but speculate as to the conclusion of the mystery themselves. Despite that, no amount of speculation will bring Carter’s audience to the true answers to the questions that are sure to arise for them throughout the story.

Twists and turns are an obligatory part to any mystery novel and Carter definitely delivers. While unexpected developments are numerous throughout Death at Whitewater Church, they are never overwhelming or difficult to follow. Whenever her audience begins to relax, she throws something new at them and readers are once again on the edge of their seats.

One aspect of the story that is particularly interesting is the drama of Conor Devitt’s disappearance. Though it’s quickly revealed that Devitt is not the skeleton found in the crypt, the personal drama of his disappearance before the story takes places connects many members of the community in ways that both Ben and the reader do not expect. As the mystery of the skeleton is investigated, Ben learns more of the secrets that Inishowen has been hiding from her, as she is still a relatively new resident. Ben herself is an engaging character with a secret of her own. She is an excellent narrator who brings the story to life with her sharp observations and curiosity. Both intriguing and relatable to the reader, she is a stand-out among the many other colorful inhabitants of Inishowen.

Andrea Carter delivers a strong start to a new murder mystery series. Death at Whitewater Church is a clever story with a large cast of interesting characters. If the subsequent novels are anything like the opening one, she and her protagonist Ben are certain to attract a devoted following.

Quill says: The town of Inishowen definitely has a few more mysteries that need to be solved!