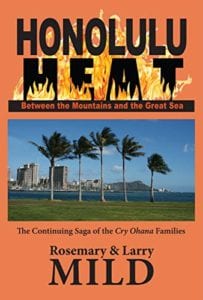 Noah Wong is a troubled teen who gets caught up with violence, theft, murder, a mobster’s daughter and the leader of a Chinese “Protection Payment” scheme in the new thriller Honolulu Heat. His loyalty forces him into hiding, but it’s only a matter of time before he must come out to prevent another murder.

Noah is orphaned at two years old, when his parents are killed by a wild hurricane in Hawaii. Kind neighbors and friends, Alex and Leilani Wong, take the poor boy in and adopt him one year later. Fast forward 12 years, Noah Wong is attracting the wrong kind of attention in school until he is mesmerized by Nina Portfia. Noah gets a job at his Uncle Kekoa’s bakery and tries to clean up his act, but an ill-fated group date with Nina, who is forbidden to date boys by her strict crime boss dad, ends in the fatal shooting of one of their classmates.

Noah confides in his uncle, but ultimately decides he has no choice but to run, fearing the truth about the murder and Nina’s involvement in it will be uncovered. He ends up hiding in the apartment of a crooked Chinaman, who puts him to work as an errand boy. When Nina’s dad learns the truth about the shooting, he orders his henchman to find Noah and bring him to the Portfia family compound. Noah quickly flees from his job as errand boy as well and ends up running straight into the hands of danger once again.

While there is a good story line in Honolulu Heat and I was anxious to know how it all ended, it had a slow start and took a while to get to the action. It could also be a bit confusing at times with a multitude of characters and side stories. For example, in a single nine page chapter, fifteen characters are introduced, and a few different mini-stories emerge. In addition, at times the dialogue was somewhat awkward. As a plus, however, an epilogue wraps up each set of characters nicely, so you aren’t left wondering about the fate of anyone. The authors also did a nice job developing the main character and I did enjoy the cute teen couple’s relationship, a mixture of innocence and deceit.

Quill says: Honolulu Heat will keep you guessing until the end. It is a wild tale of first love, bloody battles and family loyalty under the Hawaiian sun.