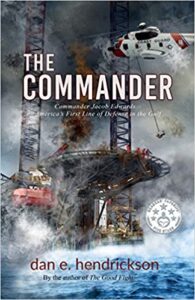 Author Dan Hendrickson is back with another electrifying action-adventure novel in The Last Enemy series, a prequel entitled The Commander.

Our story begins with the recent promotion of Lieutenant Commander Jacob Edwards to the position of commander of the newly refurbished Hamilton-Class cutter, First Responder. His previous military posts with the United States Coast Guard had been very successful, primarily with a naval task force in the Caribbean. The promotion is a somewhat controversial and unexpected position since he had only been in his previous position a few years. However, due to his unique qualifications in combat and law enforcement, and the fact that he’s the only one who has been compared to other noteworthy military men of the past, including Captain Tommy Williams, his superiors believe that he is the most qualified person for the job.

Edwards is barely in his new position when he gets orders that he must travel to the Gulf of Mexico to investigate and take care of a possible terrorist-related threat in the area. It’s a potentially deadly mission that not only must be accomplished with swift but precise maneuvering, but it also has to be done in secret, as per direct orders from the President of the United States. As the story unfolds and Edwards gets nearer to his destination, he discovers that the threat is far worse than originally expected; it’s a shocking and complex plot that involves industrial terrorism and mass murder. The stakes couldn’t be any higher for Jacob Edwards and the crew of the First Responder. But will this emergency mission prove to be too much for the Lieutenant Commander, and will he be able to get to the destination in time to put a stop to the heinous plot that has the potential to wreak havoc and send ripples of destruction globally, or will it be too late?

The Commander is a well-written and fast-paced story brimming with intense action scenes, and heart-pounding suspense. The author is adept at creating a compelling story with a bit of historical realism, that is woven into the classic theme of good guys versus bad guys. The characters are solidly fleshed out, dynamic and likable, even the villains, which you’ll love-to-hate despite their insanely twisted plots and horrific behaviors. This is because the author gives a look into the minds and actions of the bad guys, and not just of the hero. Though technically a prequel in the series, this novel can stand on its own and be an enjoyable read, even for those who are unfamiliar with the previous books or characters (it may even compel newbies to continue on reading the rest of the stories in the series). Veteran readers of The Last Enemy series will not only be able to delve into a segment in the life of Lieutenant Commander Jacob Edwards and his crew, but will be entertained and riveted by each page, from beginning until end. Note that parts of this novel may be a bit confusing at first for readers who aren’t familiar with military rankings or jargon in some aspects of the story, but that shouldn’t deter readers from picking up a copy and diving into this thrilling novel.

Quill says: Author Dan Hendrickson is back again with another gripping adventure in The Last Enemy series that you don’t want to miss!