In a Witch’s Wardrobe: A Witchcraft Mystery 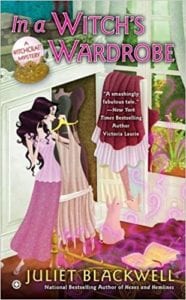 Lily Ivory, owner of a vintage clothing store, Aunt Cora’s Closet, had dressed up for a night on the town. San Francisco’s Haight-Ashbury area was host to the annual Art Deco Preservation Ball. Lily was a bit rhythm-challenged, but there was excitement in the air with the mingling of ghosts from the past and a smattering of witches. She wasn’t a necromancer, but the aura of a 1930s crowd seemed to bring it out in her. Aidan Rhodes, a handsome, powerful witch greeted her at the door. Lily would have been delighted to simply fall into his arms, but certain things such as the fact that his “magical services” came at a price were a total turnoff.

It was an unexpected turn of events when Lily actually found herself in Aidan’s arms when a young woman suddenly stumbled on a staircase throwing her forward. Miriam Demeter was apologetic, but appeared to be in some sort of daze. Lily’s “undeniable attraction” for Aidan was soon forgotten when Miriam was later discovered lying on a chaise lounge in an unnatural state. Miriam’s sleep carried with it the stillness of death, but she was still living...barely. Lily would later return to her shop to meet up with her pseudo-familiar Oscar, but not before receiving the shock of her life.

After Miriam had been transported to the hospital, Lily was stunned to find that her “spirit was trapped in the reflective surfaces of the Paramount Theater.” The sleeping beauty would soon be joined by other members of the Unspoken coven, only Tarragon Dark Moon was no longer among the living. Anise appeared to be between two worlds and unstable energies seemed to be arising everywhere. Lily was able to “sense vibrations” not only from people, but also from clothing. A snippet of baby clothing told her that somewhere a child’s life lay in the balance. SFPD homicide inspector, Carlos Romero was soon asking for her assistance in solving Tarra’s death. It looked like someone was trying to wipe out San Francisco’s witches. Would she be able to save Miriam before someone used their bad juju to send her into the spirit world? Would she too be trapped in the netherworld of mirrors?

This entrancing new age, paranormal mystery is powerfully attractive. I’ve only read one other paranormal cozy, but somehow this well-crafted bewitching tale was especially enticing. Lily, the protagonist, wasn’t cast as a perfect being and in fact often seemed more natural than preternatural. Admittedly even Lily claimed that covens made her a bit nervous. The book swirls though the mysterious world of witchcraft, the Feri tradition, San Francisco culture, and, of course, the world of vintage clothing with aplomb. The Sleeping Beauty curse may have visited Haight-Ashbury, but once the reader begins to turn the pages of this book, sleep will be next to impossible!

Quill says: If you like your paranormal mysteries with a dash of ghostly, paranormal evil, In a Witch's Wardrobe will raise the hair on the back of your neck!