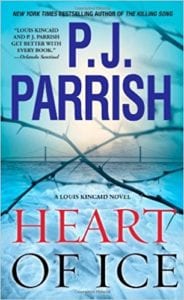 In this new mystery novel by P.J. Parrish, Louis Kincade, Private Investigator, goes back to his roots in the state of Michigan, taking his newly found daughter, Lily on a short vacation. He has just found out recently that he has a daughter and wants nothing more than to make up for the time they’ve missed.

Louis takes Lily to Mackinac Island off the coast of Michigan for some ‘alone time.’ They are taking a bicycle ride around the island when Lily comes upon an old, abandoned hunting cabin. While looking around the old house, Lily falls through a rotted out floor and lands on a pile of human bones. Louis calls the island’s police chief, who is not terribly good at solving crimes, and is talked into helping out on this extremely cold case. Louis is between jobs at the moment and accepts the police chief’s offer to help out. During the investigation, Louis and the local police have to work with an investigator, Norm Rafsky, who once worked with Louis’ girlfriend many years previously; a girlfriend who comes to help and ignites tempers between the various police presences.

This is one terrific story. So many stories come to light that go back at least twenty years. A missing skull turns out to be a ‘key’ factor in the investigation that brings about mysteries galore. There are many interesting characters waiting in the wings to also mess up the investigation, including: an old flame of the supposed victim; a slightly disturbed young man with an affinity for bones; police who do not like each other at all and are in a race to see who is the smartest; Louis, who is trying to mend fences; and Rafsky, who hates everyone including himself. Readers will have to pay attention as the characters move around very quickly and you could get confused. I read the book in one afternoon as I wanted desperately to find out who did it.

This amazing series is written by two sisters who have a wonderful imagination and do very good research. One of them lives in Florida, where Louis dwells at present and the other in Michigan, where the book takes place. The plotting and characters are first rate and I’m looking forward to the next ‘chapter’ in Louis’ life!

Quill Says: Never close your eyes – never turn the pages too quickly – you do NOT want to miss a thing!