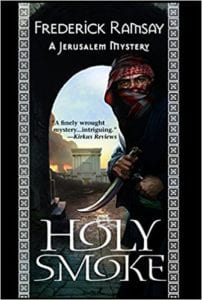 Holy Smoke is the third novel in Frederick Ramsay’s The Jerusalem Mysteries series.

As the story opens, kohanim (Hebrew for ‘priest’) Josef ben Josef discovers the remains of an unknown man beneath the Veil of the antechamber to the Holy of Holies—the Temple’s sacred Chamber. The only remains visible to the kohanim are the ankles of the mystery person; bound in the heavy cord wrapped around his lifeless ankles. As priests gather ‘round the spectacle, it is only when Caiaphas, high priest of the Temple, arrives before initial shock begins to subside. Fear, however, remains high among the group. It is not until rabban of the Sanhedrin, Gamaliel, appears that a semblance of order begins to unfold. Gamaliel’s initial investigation tells him the mystery body is not the result of a divine or holy occurrence. Rather, someone has dumped the charred, lifeless body beneath the Veil and was careful to secure it with the cord in an attempt to stage the scene as a suicide. Sometimes what seems the obvious is nothing of the kind. Gamaliel intends to prove the body was placed there and, by no means, did that man take his own life.

The story is set in the year 29 C.E.—a time when more than distinct differences prevail between Jerusalem and the oppressive rule of the Roman Empire. Gamaliel is an arbiter—interpreter of the Law. Satisfied he has ruled murder being the obvious situation, his job now is to solve the egregious wrong doing. He elicits the help of his confidante, Loukas, a powerful healer among the Jewish community. It seems the further Gamaliel immerses himself into the quest for truth, the greater his challenges become to uncover the truth. There are foes among them who wish to bury the truth, no matter the expense to do so. If only it were one murder to solve, but as the story progresses, a trail of bodies mount the closer Gamaliel and Loukas get to the absolute truth. It would seem hul gil, a powerful opiate, is the key to unlocking the answers the two seek in order to gain ultimate resolution.

Frederick Ramsay has done an outstanding job of weaving fascinating and historical information under the cover and plot of a murder mystery. It is obvious to me he spent a respectable amount of time studying his periodic subject matter because of his confident delivery of a very credible story. This is what I call a successful formula. Ramsay is patient. He presents just enough to build intrigue across the pages, yet commands a willing readership attention in so doing. There is never a moment throughout Holy Smoke where the reader will experience a lull or plot confusion. Rather, there is a tremendous amount of history lesson going on and the treat is the reader gets to experience fascinating information from an epic period of time for mankind while collecting facts to solve the mystery. Ramsay captures the period with superb eloquence in his word placement. Holy Smoke is a terrific tale of murder, mystery and intrigue and what makes it so captivating is the period of time within which he elected to place the tale.

Quill Says: Holy Smoke is a worthy novel that will appeal to historians as much as murder mystery fans because of the religious and secular period of time it was written.