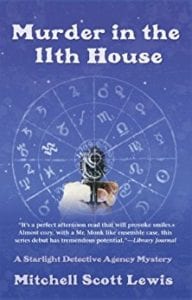 The Starlight Detective Agency, in Manhattan, is run by David Lowell, an astrologer/detective who uses astrological charts to find the bad guys and solve cases. He is hired by his daughter Melissa, who is a defense attorney and also very interested in astrology to investigate and prove the innocence of Johnny Colbert (a female bartender with a big mouth). Johnny is accused of murdering a judge in a New York City parking garage. Being an astrologer, David starts an astrological chart using the person's birth date and time of birth. This tells him about the individual and what he can expect while investigating.

Melissa, being a junior associate in her law firm, is handed a pro bono case involving Johnny Colbert, who has been charged with the murder of Manhattan Debt Claims Judge Farrah Winston. She has already looked up Johnny's birth chart, handing it to her father and he proceeds to give it his utmost attention. If he sat with a magnifying glass like the old time detectives it would be the same sort of scrutiny. The likely facts make it look like an open and shut case. The Judge was killed by a car bomb. The suspect got into a heated argument with the judge earlier that day in court and the suspect is also a member of a national guard unit that specializes in making and defusing bombs. What else would you possibly need for a conviction? David has an interesting staff including: Sarah, office assistant; Mort, an extremely able computer hacker and Andy, his bodyguard/driver. While searching for clues that will exonerate Johnny, he is sure that the real killer is out to get rid of Johnny so, he invites Johnny to stay in his New York Townhouse until she goes to trial. She is not an easy person to be around and this makes for some really great situations.

This first book in The Starlight Detective Agency Series is a definite winner. With the help of everyone's birth charts, David is able to sort out the sheep from the goats and find the real reason for the crime that leads to an interesting surprise ending. If readers thought that Sherlock Holmes could be a psychic from time to time, you ain't seen nothin' yet. This story and its astrological searches is unusual detecting and hopefully will not be the only time we meet David and his unconventional team.

The writing is first-class, and it reads true given that the author is a practicing astrologer. Additionally, the characters meld together very well.

Quill says: According to Shakespeare's Hamlet: There are more things in heaven and earth, Horatio, than are dreamt of in your philosophy. That line was stated in the publicity for this book, by author Jeanne Matthews and is certainly true. So, as I said before, you ain't seen nothin' yet.