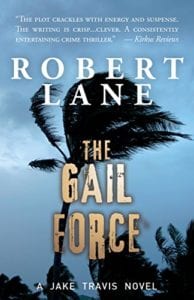 Private Eye Jake Travis is at it again - this time with a twisty plot that will keep fans of the genre glued to the book well beyond "lights out."

The Gail Force, book four of the Jake Travis series, opens with Karl and Riley Anderson who have just arrived in Florida, not to vacation, but to hide out. It seems that through their accounting company, they picked up a customer who was less than above board. That customer, Phillip Agatha, also known as the "Fat Man," was doing some very illegal deals via his art gallery. Karl went to the FBI and they're the ones who hide the Andersons. Unfortunately, somebody at the FBI shares the hideout location with Agatha. When he shows up at the Anderson's place, he and his thugs kill Karl, although Riley manages to escape.

Riley, frantic and on the run, asks a local resident to recommend a good PI and is told about Jake Travis. She tracks him down and asks for his help - she wants the "Fat Man" to pay with his life for killing her husband. Jake agrees to help Riley, and before long he's working undercover for the FBI.

Jake has a weakness for all things "boat," so a magnificent yacht owned by Agatha, the Gail Force, is something he certainly is interested in, and not just for working the case. But then there's Christina, Agatha's assistant. Does Christina need rescuing too, or is she on Agatha's team? And just who at the FBI can Jake trust? He'll have to figure it all out, and quick, if he's going to survive this case.

I knew I was in for an interesting read when I read (and then re-read) the very first sentence of The Gail Force - "Karl Anderson knew he'd made a mistake when he got a sex change and neglected to inform his wife." It took me a moment to figure out just what was happening (I haven't read any of the other Jake Travis books) but once I did, I had a good laugh. Lines like that are throughout this thriller, which definitely helps break up the tense atmosphere. But that tense feeling is definitely part of what makes The Gail Force so much fun to read. Trying to figure out who the leak is at the FBI, whether Christina is good or bad, and other aspects of the plot, will keep fans of this genre reading till that very last page.

Quill says: If you like thrillers with plenty of twists and turns, check out The Gail Force.