A Spoonful of Murder: A Soup Lover’s Mystery 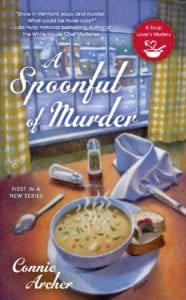 A Spoonful of Murder: A Soup Lover's Mystery

Snowflake, Vermont was host to more than its share of blustery weather, but cold weather was soon forgotten with the warmth of a bowl of hot soup. By the Spoonful’s soup ladles were seldom idle when Chef Sage DuBois was concocting a new recipe. Tongues began to wag with chatter and gossip when something was new on the petty menu, an unexpected benefit that often filled tables. Lucky Jamieson, Spoonful’s newest owner, had unfortunately inherited the business upon the tragic death of her parents. Her guilt at not having been a more attentive daughter, was assuaged by her grandfather Jack, who could wield a ladle with the best of them.

A bowl of soup could easily warm Lucky’s stomach, but a glimpse of Dr. Elias Scott, her secret crush, would send it fluttering. One person she wasn’t happy to see was Sophie Colgan, a “townie” who was jealous of Lucky’s Madison education. Her interactions with Lucky could be described as passive-aggressive at best. She was having enough problems trying to figure out why the books didn’t seem to balance without having to deal with animosity. It wouldn’t be long before there would be nothing to enter in those books and the “biggest gossips” in town, Marjorie and Cecily, would have plenty to talk about. Ötzi the Iceman had nothing on the corpse Sage discovered behind the Spoonful.

Lucky practically went into shock when she found herself “staring at a death mask--a death mask of ice.” Chief of Police Nate Edgerton would quickly pull her out of her trance when he took control of the situation and arrested Sage. “She gave every man she saw the eye.” Cecily was talking about that high falutin’ trollop, Patricia Honeywell, an elusive seasonal renter. Corpsicles weren’t good for business and soon Spoonful’s tables were empty as fear clutched the once bucolic town of Snowflake. Lucky was determined to find the real killer, but the mystery was deeper than blizzard snows. Her probing soon found her in the shadows as “strong fingers gripped her arm.” Had she found her answers? Was Lucky next?

This delightfully charming cozy mystery is the perfect read for a cold winter’s night. Naturally haling from the real Snowflake territory, this soothing, easygoing tale reiterated what small town Vermont life is like. Snowflake’s characters were so small town they could have been my neighbors. I loved the way Lucky put together seemingly disparate clues in her effort to find out whodunit and save not only Sage, but also By the Spoonful. Her tentative return to small town life and skittishness quickly evaporated as she became a strong, capable sleuth. From soup to nuts, this series promises to be a gourmet recipe for murderous excitement, a recipe that even Snowflake Bentley would love!

Quill says: If you want a real taste of small town Vermont life with a spoonful of murder and a dash of romance, Lucky Jamieson will serve it up!