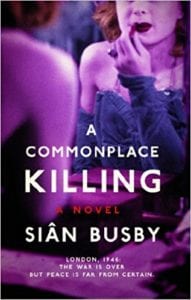 On a hot and sticky day in the month of July, 1946, a woman, Lillian Frobisher, is on her way to buy some bread. She knows that she will have to stand in line for about two hours and wait for it. She also knows that bread is about to go on the ration list but she still makes up her face and checks the seams on her stockings to see if they are straight. If you met Lillian you would think she was a lot younger than her true 43 years. When she left home her husband, Walter, was still in bed. He is a WWII veteran. She looks at him sometimes and wishes that he hadn’t come back to her. It’s not that she wanted him to be killed in the war, she just didn’t want him to come back to her. But, nevertheless, here he was. She can’t help but wish for those war days to come back.

Moving ahead a few hours, a couple of school children find the body of a woman lying in an area of North London that took a lot of bomb shelling during the war. The woman is identified as Lillian Frobisher, wife and mother, who lived nearby. Detective Inspector Cooper is called to the scene and expects to find a prostitute as the area is a known hangout for ladies of the evening. This is, of course, an assumption by the authorities. However, an autopsy finds no evidence of assault or rape so the Inspector turns to Lillian’s private life. Many questions need to be answered, such as: How did Lillian come to be in this area? Why was she strangled? Why was her husband not aware that she had failed to come back from the market on the day she was killed? Apparently, post war London was not a great place to be. It seemed that the murder of a prostitute was a regular thing (A Commonplace Killing) that did not surprise the Inspector. Fighting men coming back from the war to their homes were scrambling to find jobs and trying to adjust to civilian life. Lillian’s husband was just looking for life to begin again but Lillian wanted much, much more. Could that be the connection to her murder?

This novel was fictional although it was based on life in post war Britain. While the story started out a bit slow, it did pick up. It was very moving as it tells very human stories of people who had to go through the war.

Quill says: A gripping murder story that shows how the common folk tried to come back from a devastating war.