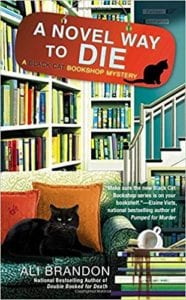 Pettistone’s Fine books was in dire need of another clerk, but Hamlet nixed most of the applicants. “We have a shop cat,” Darla explained, “and he’ll have to approve you first before I could consider hiring you.” Darla had inherited the shop from her Great-Aunt Dee along with Hamlet the cat, who definitely has something to say about everything. Yet another consideration was her other clerk, the “terminally stuffy,” former professor, James T. James. Jaqueline ‘Jake’ Martelli, a good friend of Darla’s, was also setting up shop as a private investigator. Hamlet was already an experienced PI and was well-known for snagging books off the shelves of Pettistone’s, indicating clues that inevitably led to a murderer.

“You’re that kid who accused me of murder!” Darla could not believe that goth, steampunk kid actually had the nerve to apply for the job. It was one of those not-so-magic moments, but she had to admit, Robert Gilmore was qualified and Hamlet loved the guy. He’d worked for Porn Shop Bill in his book store, but books were books. Sorta. Hamlet hired Robert and that was that. As much as Hamlet loved Robert, he detested one of their customers, Curt Benedetto, and always gave him his “patented kiss-off treatment.” Darla also had to admit that his partner in the refurbishing business, Barry Eisen, looked like he could be THE guy in her life, but it was just a passing thought.

Jake had been hired to investigate Curt, who had some sort of a vendetta going on with Bill. She wasn’t talking any more about the investigation than Darla was talking about Barry. It wouldn’t be long before Jake’s case unfortunately bit the dust. An incredulous James could barely believe what he was hearing when Darla put things in plain English for him. “Yeah, it was pretty obvious from that whole stiff-as-a-board-not-breathing thing he had going on.” Curt was d-e-a-d and his young girlfriend, Tera, was missing. Apparently the only witness to the crime was Hamlet, but his “book-snagging” clues were somehow missing the mark. It wasn’t long before Darla found herself “caught in a living nightmare” when hands circled around her neck in a death grip. Ms. Pettisone had found the killer, but would someone be able to find her before she ended up on Jake’s caseload?

This fabulously unique series with Hamlet, the bookshop cat, looks like it’s going “to be” a winner. To be or not to be caught, that is what Hamlet’s job is in Pettistone’s Fine Books. Errr, to catch the killer that is. When Hamlet snagged a book off the shelf Darla and James pored over the meaning of his clues, but some of them were real stumpers. If you are a real literary mystery buff you can try to work them out right along with Darla as she outlines possible scenarios, some of which can be pretty tricky. Of course with only so many characters, it’s quite easy to point the finger at a possible killer, but it’s so much more fun to follow a trail of crumbs right to those hands circled around Darla’s neck. When she found herself in a real predicament, all those cat clues suddenly fell into place. If you like cozy cat conundrums, this might just be the series you’re looking for!

Quill says: This second book in the A Black Cat Bookshop Mystery series has cat clues that will definitely suit Hamlet and Holmes fans!