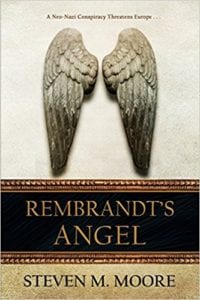 Aging Inspector (and three-time widow) Esther Brookstone, remarkably skilled in the Art and Antiques Unit with Scotland Yard, has a few major life decisions to consider. Should she quietly retire from a lengthy and productive career with the Yard, or should she, as Dylan Thomas once penned, "...rage against the dying of the light" and continue to pursue her passion as a specialist in stolen art? Almost as if to instantly answer her quandary, Brookstone comes across an invitation to a private showing of "An Angel With Titus' Features" by the artist Rembrandt van Rijn. She is fairly certain that this piece of artwork is either the long-ago stolen original by the Nazis, or, more than likely, a black market forgery, and sets out to pursue the dealers and investigate the criminal activity, putting aside any thoughts of retirement. To assist her in this wild endeavor, she joins up with Bastiann van Coevorden, who is not only a well-respected Interpol Agent, but also Brookstone’s significant other. Together their hunt takes them traveling through numerous European countries and all the way to South America and they are briefly assisted by a cast of special agents from America and Germany, as well as numerous nefarious characters, who are hell-bent on thwarting their efforts to uncover the truth behind the artwork and put a stop to a potential plot that will create a worldwide disaster.

Rembrandt’s Angel, by Steven M. Moore, is a thrilling, globetrotting adventure that provides readers a glance into the world of art forgery, Neo-Nazi conspiracies and even links to ISIS. The duo of Brookstone and van Coevorden can be favorably compared with utmost respect to Agatha Christie’s classic characters, Miss Marple and Hercule Poirot. Esther is a strong, well-liked character with a saucy disposition, while Bastiann, though he plays costar and lover to Esther, is able to hold his own with regards to likability. In addition to Esther and Bastiann, there were quite a few other characters in the story and while the author did include a "Cast of Main Characters" (which was used extensively throughout the book) this reader found it quite distracting to the overall reading flow. Perhaps if there were fewer characters or if their descriptions were a little bit stronger, it would make it easier to remember everyone involved.

The plot is complex, taking readers to many different locales, intertwining characters both new and old and this can lose the reader if they do not carefully follow along. Also, this reviewer found the subplot that included the character Sylvia Bassett to be a bit farfetched. Specifically when Sylvia, who is on the run, just happens to be discovered hiding out in Esther Brookstone’s recently inherited Scottish castle. However, despite the few issues Rembrandt’s Angel may have, this reviewer believes that Steven M. Moore’s novel should be read by fans of the mystery genre. Particularly because the author has a keen ability to weave a great storyline that is not only filled with suspense, but captures a reader’s attention. A few quotes stood out as quite descriptive and remained with this reader well after the book was completely read, for example, "In the ice cream shop of crime, there are many flavors" and "A committee of clouds enjoyed a private meeting over the manor." Finally, the character Esther Brookstone provides readers with an unusual female protagonist who is more than just a senior Scotland Yard Inspector, she is a memorable and tenacious dame who readers will undoubtedly enjoy throughout the novel and will look forward to reading any of her possible future exploits.

Quill says: Rembrandt’s Angel is a complex thriller with several plots intertwined throughout the story. It is recommended for serious mystery fans who are looking for not only a challenging read, but also one that allows readers to become an armchair adventurist and detective, along with Brookstone and van Coevorden, spanning many different parts of the globe.

For further information on Rembrandt's Angel, please visit the author's website at: www.stevenmmoore.com