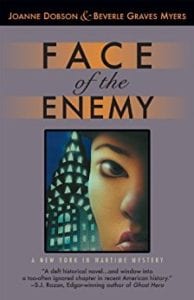 This novel starts at the end of November in the year 1941. Of course, most folks will remember that the entrance of the United States into the Second World War happened a week later. This tale has been told many times but don’t give up on this book because it has a different spin on the events that followed. This tale revolves around the bigotry that existed in the United States at that time right before war was declared and the people in this part of the US (Brooklyn, NY) who were involved in the story.

Louise Hunter, a private duty nurse, had moved to New York from Kentucky with her fiancé only to be jilted when his mother disapproved of her. Louise decides to stay in New York and lives in an apartment house in Brooklyn and goes on with her career as a nurse. In another linked in story, an artist, Masako Fumi Oakley, and her husband Robert, a Professor at Columbia University, are getting ready to attend an Art Show featuring Masako’s paintings. Robert is feeling a little under the weather but refuses to stay home because he wants to support his wife. While at the show, Robert becomes ill and has to be taken home, but not before there is a little dust up because Masako is of Japanese descent and many of the elite do not want an American gallery to handle paintings by an enemy of the country.

Getting back to Louise, Professor Oakley has contracted pneumonia and needs a private nurse so Louise takes the job and becomes close to the couple. Remember folks, this was the end of November and the Japanese attacked Pearl Harbor on December 7th. Soon the FBI show up at the Oakley’s home and haul Masako away as she is accused of espionage. Her art show has been shut down by racist demonstrators and she is taken to Ellis Island as a prisoner to await trial. On top of this, Masako’s art dealer is found murdered in his gallery and his body placed under one of her paintings. The State of New York along with the FBI want to prosecute Masako. In another part of the city, at Louise’s boarding house, the landlady is a German immigrant and she is also in a mess as her underage son has run off to join the army to make up for the fact that he’s found out his father, who ran away when he was younger, is a high powered Nazi. There is an NYPD Detective McKenna who has to fight the FBI and one of Louise’s housemates helps her to find a lawyer to defend Masako.

I truly loved this story and am looking forward eagerly to the next installment. I should say that I really enjoy stories from this era and there are places in this story when everything gets a little mixed up as the plot lines jump around a lot.

Quill Says: This starts out to be a history lesson but stick with it, as it's really a very good description of the United States in the 40's and how everyone coped with the problems at home and abroad.