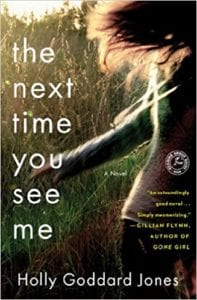 This book is a well written novel that takes in many different personalities that are extremely different but come together before the ending. These folks are living in a small town, Roma, Kentucky. Most people know that in a small town, where everybody knows your name (like Cheer’s in Boston) no one ever gets away with anything as eyes are always on you. This book contains outsiders who make up things that the insiders truly believe, middle-school kids who are just beginning to believe what life is all about, and middle-aged adults who seem to have forgotten everything that they were told when they were in middle-school. In other words,the lost souls and the souls that found themselves and everyone in between. The consequences that the people in this book have to live with are worthy of Desperate Housewives.

The story begins with Emily Houchens, a 13-year-old who doesn’t fit in with her classmates and is not very popular. Emily likes to go into the woods near her home and play make-believe games that have nothing at all to do with the kids in her class. One difficult day, she goes on a little jaunt in the woods and discovers a dead body. She decides not to tell anyone about her secret and then has to live with her decision. Another character, Susanna Mitchell, who is one of Emily’s teachers, is a nice woman with a husband and daughter and is very responsible. Susanna also doesn’t like her life but will not say anything about how she feels. She is married to Dale, who is also a teacher and, in my humble opinion, kind of a chauvinistic jerk, who really doesn’t appreciate his wife and daughter. This leads Susanna to get a little hit of wine every now and then. Ronnie, who is Susanna’s sister, is the exact opposite, a very unpredictable, party loving woman who lives her life the way she wants to and doesn’t care what other people think. Susanna is worried about Ronnie as she has been missing for a while and no one knows where she has gone. Being the free spirit that she is, Ronnie is not missed by anyone as they think she has just gone off by herself and will come back when she is ready.

Along with these people there is a detective, Tony, who was once an up and coming baseball player and Wyatt, a man working in a factory who has something in his past that is bothering him. Getting all these people together and connecting their lives brings this book into its sad ending. It also brings to light the secrets kept by the cast of characters in this book. Kudos to the author for managing this difficult task.

Quill Says: This books surely takes into account all the tensions in small town living and shows each personality with all their problems.