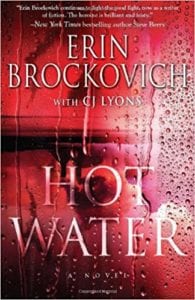 A.J. Palladino is back! This amazing woman who proved she was a mega-sleuth on top of everything else she does in the first book, Rock Bottom, is once again on the trail of some really crooked 壮lime着some are even in her own family.

A.J. was born in Scotia, West Virginia which has a population of 864 mostly nasty, cold-hearted people. When A.J. was young and pregnant this is the town that turned their back on her, but in the last book she returned home and started up her own consumer advocacy business with her friend and lawyer from Washington, D.C., Elizabeth Hardy.

These two incredible women have been trying hard to get their business off the ground; while A.J. has been trying to get the townspeople to stop crossing over to the other side of the street when she walks down the sidewalk. People in town still seem to blame her for the death of the man she loved as well as the almost deaths of her father and her own son, David.

But when a new client, a rich man by the name of Owen Grandel walks into her office in an Armani suit and offers the women one million dollars to help him convince his own small town of Colleton Landing that his conventional nuclear power plant is a good and SAFE thing, A.J. is taken on a ride of mammoth proportions.

Her son David is her hero. This kid has a mind that would put Albert Einstein to shame. Although he has cerebral palsy and is almost wheelchair-bound, David has the ability to see through things and solve crimes even quicker than his mom.

With David's birthday coming up, A.J. has to quickly go to Colleton Landing in order to see what's really going on at this nuclear plant. Unfortunately, while she was gone, her ex-father-in-law has his own agenda and has hired a man to come to town and take out A.J. family. That way, he can prove to a judge that HE is the one who should be raising David. Add in A.J.'s own parents, who are extreme hoarders who need psychiatric help; and, her best friend since youth, Ty Stillwater, who is literally in love with A.J., and the problems at the plant become almost secondary to A.J. has problems at home. Becoming embroiled in both deadly situations, A.J., Elizabeth Ty, and even David, have to come up with a solution before people get hurt, and stop a killer who seems to have no identity.

The story takes off, as the slime come out of the woodwork. A.J. must come up against everything from an angry crocodile (literally) with radioactive teeth, to a Reverend and his cult who are well beyond just protesting in front of Grandel's factory. The secrets are uncovered and the action never stops as A.J. must solve the crime, while a madman is back at her home trying to destroy the only part of her life that A.J. can live without.

The emotion, the explosions, the mysteries - everything in this book was A-one from the first page. Erin Brockovich has done a wonderful job bringing her life as a consumer advocate to the masses, and C.J. Lyons - a mistress of suspense - adds her brilliance to every page.

Quill Says: A great mystery with nonstop action and characters that readers will absolutely want to join forces with.