Skein of the Crime: A Knitting Mystery 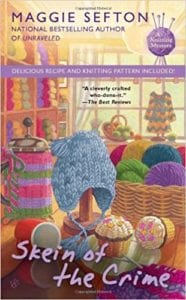 Skein of the Crime: A Knitting Mystery

Fort Connor, Colorado had been a peaceful place ever since the murder of Kelly Flynn’s Aunt Helen three years before. Some things aren’t forgotten, but everything somehow seemed to nestle back into place and Kelly’s most pressing need was simply choosing a yarn for her boyfriend Steve’s hat. The camaraderie at Lambspun, the local knitting shop, made for cozy company where clacking tongues and knitting needles joined together to make a lively community of friendly knitters. In fact, Jennifer had just called to see if Kelly wanted to help Barbara Macenroe with a class of knitters. Knit one, purl two. It sounded like a plan and instead of crunching numbers as a CPA, she’d be counting stitches.

With knitting on her mind that night Kelly was ready to settle into a cozy evening at her cottage, the one she inherited from Aunt Helen, when she noticed her dog, Carl, was unsettled. She suddenly spotted a young woman standing like a zombie on her patio, but this was Lemay Avenue, not Elm Street and it was an eyebrow raiser with a freaky twist. The girl began to rock and smile and if Kelly had been a scrapbooker instead of a knitter that girl’s forehead could easily have been stamped with the word “gonzo.” Was there something in the Fort Connor water, or what?

Just as Kelly seemed to have forgotten the incident she learned that Holly Kaiser, the druggie, had apparently cured herself and was going to be taking a knitting class at Lambspun. “Mother Mimi” was going to take her under her wing. It was a good thing because outside of getting that gal off her patio, Kelly had no interest in being a nursemaid to some freaky college student. It was bad enough that she learned that Holly was Barbara’s son Tommy’s girlfriend.

Just when you thought the madness would stop it started to churn again. There were six attacks on the river trail in as many months and with this girl on board, things were beginning to hop in Fort Connor again. It wouldn’t be long before the needles would stop clacking and the tongues would start up in earnest. Some girl had been killed over on the river trail. Guess who? Kelly would soon be doing a lot more sleuthing than knitting because that corpse just happened to be Holly’s.

If you want a nice unrushed mystery that moves along at a comfortable pace, “Skein of the Crime” is one you’ll totally enjoy. It has all those elements of a real life soap opera that could just happen in your neighborhood. There are the gossipers, the wedding planners, the faction who enjoys a good “pharmacological stew,” the coffee clutches ‘n knitting clans, the “jilted ex-girlfriend” . . . everything that makes every other small town in America click. I have not read any of the previous books in this series, but found this one can stand alone quiet nicely. It was one of the types I looked forward to reading a chapter or two each night.

Quill says: If you like a cozy mystery that has all the elements that will spin a believable yarn instead of a quirky one, this is a tale you’re going to love!