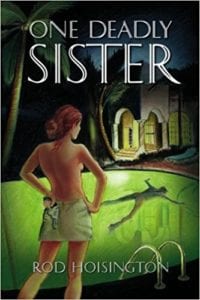 After his divorce, Ray Reid decides to create a new life for himself by moving from Philadelphia, to a small town in Florida. However, it seems that bad luck with women has followed him to the ocean town because one night he is seduced by a sexy, brash woman, who's several decades his senior. The next thing Ray knows, he's being framed for the murder of a prominent gubernatorial candidate. Worse yet, the local prosecutor, who himself is hoping to move his career forward to a spot in the Senate, is hot on Reid's tail and is relentless in his pursuit, ignoring all other possible suspects. Ray's predicament seems impossible to remedy until he figures his only hope of getting out of jail is to contact his estranged sister to ask for help. At first his sister wants nothing to do with her brother's problems, but she soon changes her mind and ends up in her own relentless pursuit of the real killer. The search takes her through a wild ride of increasing deception, evil, and fast-paced mystery.

First time author Rod Hoisington has spun an excellent mystery story that provides a plot full of twists, surprises, an array of colorful characters, and even a dash of humor. The raw Reid brother and sister duo subplot that springs into action in the first pages leaving readers wondering what is going on, is simultaneously spinning along with the crazy, yet mysterious primary murder plot, which is well formed and keeps readers captivated while the entire story quickly unfolds. Readers will undoubtedly become hooked to this story as did this reviewer, and will look forward to more dynamic stories from Mr. Hoisington in the future.

Quill says: If you enjoy mysteries that keep your mind guessing and racing until the very end, you don't want to miss this story.

To read the review on the second book in the Sandy Reid Mystery Book Series, The Price of Candy, click here.

For more information on One Deadly Sister, please visit the author's website at: Rod Hoisington.com