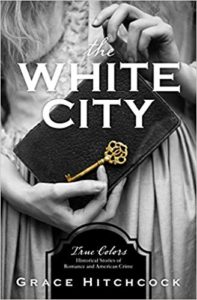 Grace Hitchcock launches a thrilling debut novel of mystery, romance and intrigue in the first of a new fiction series (True Colors), titled The White City.

It is the Chicago World’s Fair, and the year is 1893. Winnifred Wylde is certain she witnessed a woman being kidnapped while attending the fair. This apple didn’t fall far from her father’s tree given she is the daughter of a renowned inspector with the Chicago police. While he is commissioned to investigate the reports of questionable disappearances around the White City (Chicago), little did he know his daughter was not going to sit by idly without getting her own sleuthing skills into the game to solve the mystery.

At the same time, Winnifred was rapidly losing patience with the current suitor of the day. Why was her Auntie insistent on finding a suitable man to marry off her only niece? Could she not see Winnie had greater designs in life beyond needlepoint and meal preparation? As her current suitor, Mr. Saunders, droned on with the abysmally boring chatter, Winnie couldn’t help but wonder what happened to that women who she is certain was abducted before her very eyes. It was time for Winnie to take matters into her own hands—with or without the blessings of her dear father. Inspector Wylde knew his daughter all too well. Having lost her mother at a very young age, he couldn’t help but overprotect his only offspring. When the reality sets in that Winnie will pursue at all costs to solve the mystery at hand, Inspector Wylde acquiesces with certain conditions. In walks the debonair Inspector Jude Thorpe. It seems his latest assignment will be to keep Winnifred Wylde out of harm’s way...or else.

I was pleasantly entertained by Ms. Hitchcock’s ability with her debut novel. She adeptly extracted factual accounts from the first serial murderer in the White City and applied them to a story with great flow. She developed main character Winnifred Wylde with a terrific balance of both a gentile demeanor that is complemented by independence and substance for a woman during the period. She carefully assigned proprietary behavior with a great accent of adventure and spirit. Winnifred’s counterpart, Inspector Jude Thorpe, had just enough of a man’s man quality about him, but Ms. Hitchcock selected opportune moments throughout this read to paint a picture of this manly man with a soft side as well. The ebb and flow of the story was consistent in moving the story along at a nice clip without lending way to obvious predictability. Her timing was spot on when the spotlight was finally cast on the villain. Well done Ms. Hitchcock! I look forward to the next installment in this series.

Quill says: The White City offers up a terrific adventure of murder and intrigue that transcends far beyond exotic exhibits and cotton candy at the Chicago World’s Fair.