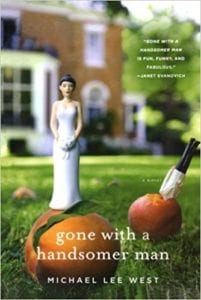 Teeny Templeton is a woman who grew up being moved from place to place by a mother who had no idea how to raise her daughter. Teeny is left with her aunt, who was a culinary genius living on a peach farm. Not only did Teeny love her aunt, but she learned so much about the world and passion surrounding food, that cooking became her first love.

Teeny knew love once upon a time when she was younger with a man by the name of Cooper, who broke her heart when he went back to his ex-girlfriend. Teeny has moved on from that time in her life, and is now engaged to a man named Bing Jackson. Bing, as a twenty-ninth birthday gift, gives Teeny some pastry bags and paid classes at the Cake Design School in Charleston. Unfortunately, when she arrives at the first class there is a note on the door that says the teacher had to reschedule. Heading back to the house, Teeny gets the surprise of her life when she finds Bing playing badminton on the back lawn…naked…WITH two women who are also naked, and having a great time hitting their shuttlecock back and forth. Teeny can’t believe what she’s seeing and ends up in a tree hurling hardened non-ripe peaches at the players.

Poor Teeny is soon arrested and put on probation for attacking the threesome, and turns to Bing’s Aunt Dora - who is a sincere fan of Teeny’s and absolutely hysterical. Bing’s Aunt Dora (who was named after a hurricane) allows Teeny to live at the Spencer-Jackson House. This old historical relic is quite uncomfortable for Teeny to stay in because Bing is actually the owner of it. Soon, one of the naked badminton players is putting up a ‘For Sale’ sign on the front lawn, and Teeny has to figure out what to do. She’s on probation, so returning to the peach farm of her youth is out of the question. And when she receives a text message from Bing asking her to meet him at the house to “make-up,“ Teeny is shocked once more when she discovers Bing’s dead body on the floor.

Teeny is the main suspect and Cooper - remember him? - is now back in her life. Cooper is now a lawyer and, with his help, and his old, crotchety private eye - Red Butler Hill - they must find a way to prove Teeny’s innocence and catch the real criminal.

There is nothing that can be said about this book except…absolutely hysterical! This debut novelist has done a fantastic job from her plot to her unforgettable characters, and dialogue that will have readers laughing until it hurts.

Quill Says: Fantastic Story! Hopefully this is one author who’s working on a sequel as we speak!