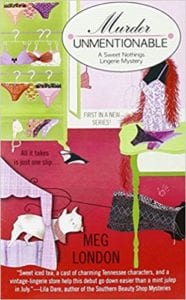 When Emma Taylor took one look at her Aunt Arabella's lingerie boutique, Sweet Nothings, there was no shabby chic look, but rather something reminiscent of Brady Bunch décor gone wrong. Like totally wrong. Green shag carpet wrong. Arabella's shop was in Paris, Tennessee and oooh la la was not quite the word for the town, but très charmant it was. Emma was a big-city fashionista, but could envision a lovely shop made over into one in which they could specialize in vintage lingerie rather than one with plain old undergarments. No arsenic, but a lot of old lace would be perfect.

Emma's heart was set on having Brian O'Connell do the structural work on the shop, but she wouldn't have minded it if he'd work on her as well. Guy Richard, who thought he was God's gift to women, had done a number on her and she needed a fresh start. A town with an Eiffel Tower replica, and stores with the names Angel Cuts and The Taffy Pull was the perfect place to begin again. It was perfect until Guy showed up on the shop doorstep trying to win her back. It didn't help matters when Aunt Arabella, whose French was a tad stale, batted her eyelashes at him and spouted, "Voulez-vous couchez avec moi?" Oh, please!

When Kate Hathaway, Guy's "long-suffering" assistant and model Nikki St. Clair showed up it seemed as if the Big Apple had a direct flight to Paris. If they wanted entertainment they could turn tail and head home, but soon there'd be enough entertainment for everyone. "Looks like a body. We got ourselves a real, live dead body." Paris's policemen knew a dead man when they saw one and that man was Guy Richard who had been "clonked over the head with something." Emma would soon be a person of interest when Detective Chuck Reilly, CID, was on her case like flies on sweet Tennessee Tea, especially when someone else got clonked over the head. Would Emma be able to clear herself before she ended up in the pen or worse yet dead?

This charming Southern-style mystery is sweeter and snappier than pralines served up with sweet Tennessee tea. I loved the big-city meets small town charm. The characters ranged from those you might meet in Mayberry to sophisticated Manhattan denizens, a group who somehow meshed together quite nicely, even if the knuckle cracking set my teeth on edge. Emma wasn't a dainty sleuth by any means and tended to be a go-getter, an appealing woman who didn't sit back and wait for clues to fall in her lap. She was out asking questions, shoving pictures in people's faces ... no way would the police hang this one on her! If you like your cozy mysteries served up Southern style with a little bit a romance, you'll love this new series!

Quill says: Murder Unmentionable is a first in the series cozy mystery that will attract fans to gay Paree (Tennessee) like butter to a croissant!