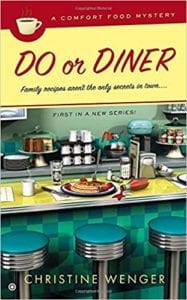 Beatrix "Trixie" Matkowski never thought she'd end up back home, but after her ex, Deputy Doug Burnham, got little Wendy in a family way, it was time to head home to Sandy Harbor, Salmon City Capital of the World. To add insult to injury, the lovely couple was having twins. Enough was enough. After Uncle Porky died, Aunt Stella needed to get away and made Trixie an offer she couldn't refuse. Make the payments and the business was hers, including the Silver Bullet Diner. It wouldn't be long before she'd be having Meat Loaf Tuesdays and listening to Nancy yell, "Two cows and make them cry." Trixie was so happy she could cry herself. That was until health inspector Marvin P. Cogswell, III sent her a little notice.

Violations. The Silver Bullet had issues that needed to be taken care of before Trixie could even fry so much as an egg. The notice sent her off to the Silver Bullet only to find a corpse on the floor in the kitchen, something that definitely wasn't on the menu. "No self-respecting Timinski, Bugnacki, or Matkowsi would ever be caught dead," she heard herself snapping at Deputy Sheriff Ty Brisco, "putting mushrooms in their pork and scallop potatoes!" Marvin the Third had mooched one too many meals and was deader than disco after having eaten one of cook Juanita Holgado's special concoctions. Ty, the cowboy cop from Houston, was mighty good looking, but no way Trixie wanted him looking at her as a person of interest, least ways not as a murder suspect.

Even Chuck's Gas and Grab was getting more business than the Silver Bullet and it looked as if Trixie might not make that payment after all. Mayor Rick Tingsley was offering her cool hard cash for the diner, but the family legacy had to be preserved. Trixie was going to have to solve the mushroom murder with or without Ty's help. She'd already been reamed out by Marvin's girlfriend, Roberta Cummings, at the Happy Repose funeral parlor and the rest of the community followed suit. No one was enamored with an ax murderer and a mushroom murderess didn't turn them on either. Antoinette Chloe Brown's restaurant was flourishing as was Tingsley's. Something was mighty fishy in the Salmon Capital of the World, but what was it? Did someone want Trixie out of the way and why?

Do or Diner is a delightfully charming to die for first in the Comfort Food series. There wasn't any waiting to find a body in this cozy mystery because mooching Marvin got his just due right away. I really liked Trixie and could easily see she's got what it takes to keep up with the likes of Tricia Miles, Booktown's sleuth. Trixie was a tentative detective, but a definite natural. The light touch of humor was welcomed and the scene was set for the series with a fun, amazing set of characters. Detective. There has to be one and Ty the cowboy cop was a fascinating hunk, a hunk who just could be a romantic interest further on down the line. It looks like Bedford Hills prison will have a few inmates and Trixie Matkowski is one cool, calm, and collected sleuth who's going to put them there. This is definitely a to watch out for series in my future.

Quill says: Do or Diner is the perfect recipe for a little "comfort food!"