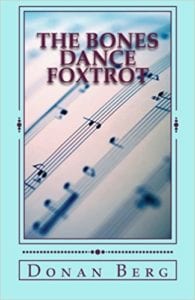 In the second book of a planned three book series dubbed the ‘Skeleton Series Mysteries,’ author Donan Berg has hit his stride and takes the reader along for a fun and fast-paced ride through a small Midwestern town. The town, Paradise, hides many secrets among its quiet townspeople and newcomer Jake Brown is about to find out just how dangerous those secrets are.

Jake Brown is a trucker who has been running from his own sad past. Losing his wife Athena after a valiant fight with cancer, he is grief stricken and feels lost. Eventually landing in Paradise, he decides to join the town’s small acting ensemble. Parking his big rig at the Mayflower Motel where he has rented a room, Jake quickly settles into life in Paradise. The trucker is quite happy living a more sedentary life acting and enjoying some ballroom dancing. He’s also piqued the interest of several of the local ladies which makes his visit all the more pleasant. Jake begins to think he may settle down in this quaint Midwestern town until a body is found in the back of his truck.

Suspicion is immediately focused upon Jake, the outsider, but did he do it? Or is he being framed? Jake insists on the later but isn’t entirely successful convincing the police of his innocence. When he makes bail, Jake is told he must not leave the area, and so with the help of Emily, one of his new lady friends, he finds a job as a caretaker at the local state park. Again, all seems to be going well until Jake notices that the basement of the park’s lodge is smaller than it should be. Was a section of the basement walled off? Along with his boss, Jake takes sledgehammer in hand and soon they’ve not only uncovered a sealed off portion of the basement, but they have also discovered a skeleton. Who do the bones belong to? Could the murder – is it murder? – be related to the corpse in Jake’s truck?

Author Donan Berg spins a twisted plot of murder, suspicion, multiple clues and budding romance in The Bones Dance Foxtrot. Berg takes the time to introduce the reader to Jake Brown, with all his insecurities and problems and builds him into a character that the reader cares about. The other main characters involved in the mystery, Emily, Kate, Patricia, Clem, and even Chief R.P. Coltraine have distinct personalities. The locales, too, come to life as places like the diner, Sadie’s, with plates clanking and the aroma of the day’s specials drifting through the air.

The police and detectives who are working to solve the case are given almost as much attention as the lead characters and it’s fun to go back and forth between their investigative work, false leads, and guess work and then follow Jake and his friends.

The reader may believe that all is solved well before the end of The Bones Dance Foxtrot, but rest assured, the author has a few more tricks up his sleeve. New friends must depend on each other if they are to go to the next ballroom dance.

Quill says: If you enjoy a good murder mystery with twists, turns, false leads, a little gambling, betrayal, clues left in the unlikeliest of places and a hidden stash of bank loot, then pick up a copy of The Bones Dance Foxtrot.

For more information on The Bones Dance Foxtrot please visit the book's website at: DOTDON Books.com