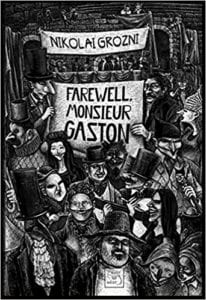 Well, I expected nothing less than perfection from the author who wrote the stunning and unforgettable book, Wunderkind, and perfection is exactly what I received.

This novel is categorically a Dionysian mystery. For those who are unaware, this is all about the spontaneous, the sensual – the world relating to the god Dionysus. From page one, the emotional aspects of human nature come into play: our flaws, our judgment of others, and our reawakening to a world we simply do not understand. Every character in this book is an actor. These actors are characters from plays and/or theatrical works. Immediately, readers are brought into the story as if they were watching it play out on an Athenian stage surrounded by the marble thrones and sculptures of the Acropolis – before the earthquakes came and turned them to rubble.

The chorus leader and his minions behind him welcome you to the tale. The leader lets you know that you are about to enter a world where comedy and tragedy combine. A world where deaths are done in a grand, morbid way. He hints to the fact that the world around you has crumbled, that dark forces and evil gods exist in the land and…HARK...the hero is coming forth (slowly but surely), who will add his talents to the stage. He will allow you, the watcher/reader, to grasp onto his coattails and hope at all times that he wins and that his entrails are not ever found on someone else’s plate.

Our hero wakes up and his past is sealed. His memory is gone. He is now in a strange, foreign world being welcomed into it by a very odd group of beings, and a hunchback that plays a large role in the story. He is told about four rules of the realm, rules the hero must obey before he enters into the adventure. These are rules that must be memorized and, if broken, can create havoc in his life.

This is his quest. A dark quest that’s filled with grand people, places and a whole lot of sarcastic dialogue. Every time you believe the band of characters has reached its maximum number, a musician, a clown, a man-eating bird – you name it – arrive to bring even more to the story. All roads run back to the first, yet this violent realm seems more like Dante’s spheres, with a hero who must find himself while battling, sacrificing and understanding all the madness that’s around him.

Once again this author not only offers up an amazing story, but he also proves and proclaims to the heavens that he is the ultimate writer with an over-the-top mind locked in a mere human body.

Quill says: After escaping into this Technicolor fantasy the everyday world looks gray. Suggestion? Go back to the beginning and start again.