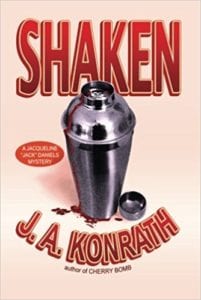 Shaken is the 7th book in a series about Chicago policewoman, Lieutenant Jacqueline "Jack" Daniels. This is the first book that I have read in the series and it's fair to say that I really didn't enjoy it all that much. The writing is good and the story the same as many torture/murder tales out there. But, this one was a bit sicker than most. "Jack" has been hunting her nemesis "Mr. K". He is a brutal serial killer that has avoided "Jack" twice over the years. "Mr. K" is the ultimate serial killer who has killed more than two hundred people in the most horrid ways.

She finally gets the opportunity to face "Mr. K." Of course, she has to do this hidden in a storage locker where he has primed her to be his next victim. She is bound and gagged and facing death in a most extreme manner. She has seen what "Mr. K" did to his other victims and knows what to expect. In the book, the author goes back in time to explain Jack's life and how she ended up as a Lieutenant in the police force. From the first time that she came in contact with the killer as a rookie policewoman and saw his horrible killing ways, through her career as she moves up in the department and is still pursuing "Mr. K." We see her grow as a person of authority and as a good friend to her colleagues. She is a different woman now but, will she be savvy enough to stop a crazy killer?

There is humor in the book but, some readers might not be able to see it as there is so much blood and gore that they might not be able to deferentiate between the fun and the killing. The ending is a definite cliff-hanger but it wasn't worth reading trhrough all the gore to get to it.

Quill Says: A well-written book but very sick in some places. After reading many Mystery/Thrillers and Horror stories, I still found it hard to read some of this book. You would have to be a very special reader to be able to comprehend all the horrible things that are done to victims in this story