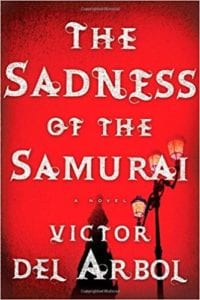 In a brief preface, taking place in a hospital in Barcelona in the spring of 1981, a woman, Maria Bengoecha, is on her deathbed. She’s under police guard because she is about to stand trial for murder. Maria was accused of plotting the escape from prison of a man who she had previously prosecuted for murder. Maria is a lawyer, as you have probably figured out. As readers will ponder the event that brought Maria to this place, we will be taken back to 1941 in Merida, Spain.

Enter Isabel Mola (in 1941), another woman who is in a mess of trouble. Isabel is trying to get away from her viscious, Facist husband, who has mistreated her frequently and forced her to leave with their young son, leaving another son behind. Isabel has a lover, who will eventually betray her and drag them back to her husband. All this comes down to a Facist bid for power in pro-Nazi Spain and what happens there. Most historians will get this part.

The novel goes back and forth between accounts of the lives of Maria and Isabel and will eventually connect the two. Things were so disturbing in Spain during both time periods and the author does not gloss over this aspect of the story as the lives of these two women unfold.

This is an extremely violent book that will definitely set the scene for blood and gore and may overwhelm some readers. It is also a translation and sometimes things do not translate well. Between the jumping between the time periods (1941 and 1981) and the translation, the text can be rather confusing in places. Readers may have to re-read a few sections as well as have some knowledge of Spanish history for a full understanding of the story. The Sadness of the Samurai is the first of this author's books to be translated into English, and is a difficult thriller and will require the reader to be patient to avoid being confused.

Quill Says: This can be an extremely difficult book to read in places as there is much cruelty to women. If you can move beyond the violence, and don't get lost in some of the side stories, it is overall a good read.