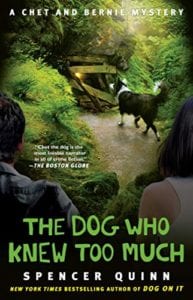 Bernie Little and Chet the wonder dog are back to solve another mystery in The Dog Who Knew Too Much, an addictive, fun, humorous and yes, suspenseful crime caper.

In this fourth book to feature the human/canine crime-solving duo, Bernie is hired by Anya Vereen, an attractive woman who just happens to be nervous around dogs, even lovable Chet. Anya wants to hire Bernie to be her “pretend friend” when she goes to visit her son Devin during parents’ weekend at the camp he’s attending. While the visit should be pleasant, Anya is afraid that her ex-husband Guy, who is also planning a visit, might be a bit disagreeable. Because Guy has some questionable friends, and didn’t take the divorce too well, Anya doesn’t want to be around the man. Guy has hinted at getting back together with Anya and she hopes that if Bernie tags along, Guy will get the hint and go away.

Bernie reluctantly agrees and he, Chet, and Anya pack into Bernie’s car and off they go into the mountains. When they arrive at camp, Anya is relieved to learn that Guy hasn’t arrived yet. Maybe he won’t come….

Anya is hopeful for a pleasant weekend with her son until the campers return to base with everybody but Devin. The guide, Turk Rendell, doesn’t seem nearly as upset as he should be and Bernie quickly begins to suspect there’s more to the story than the guide is admitting. It isn’t long before Bernie, Chet and Turk hit the trail to pick up the search for Devin.

As in the other books in the series, this story is narrated by Chet, the dog. While his nose picks up scents quite well and helps solve cases, it’s his observations about humans that are the true winners in this story. At times funny – when ordered to stay by Anya, he observes, “Did I stay for every Tom, Dick and Harry? I knew plenty of Toms, Dicks, and Harrys, and stayed for none of them. I stayed for Bernie,” and at other times insightful, - “There’s a silence when nothing’s going on, and then there’s a silence when someone’s having thoughts, very different, almost not a silence at all,” - these comments really move the story along. Bernie is nice but how can you not love Chet?