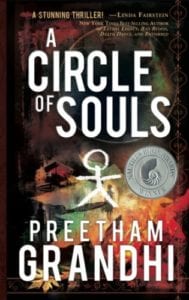 Janet and Melissa, best friends in a way only fifth graders can understand, would have liked to spend the afternoon together, but Janet’s mother wanted her home to clean her room. She could have taken the straight way home, but the swath around Willow Lake on Mr. Deed’s property was more promising and inviting. The room would have to wait and so would Janet's mother because Janet never came home. After an initial canvassing of the neighborhood, Newbury, Connecticut’s law enforcement officers issued an AMBER alert - they weren’t going to trifle with this case.

Meanwhile, Peter Gram, a child psychiatry fellow, had little Naya Hastings under his watchful eye. Her parents had caught her just before she climbed off a balcony in an attempt to “fly away.” She appeared to be uncommonly awake and alert when she was sleepwalking and Dr. Gram had to rule out everything from psychosis to organic disease. There was something else very unusual about this child. Her drawings were too mature and detailed for a seven and a half year old and they were telling stories, stories about a girl named Janet. Naya’s biological mother Meena “knew that Naya had inherited her special abilities.” Naya was meeting more frequently with Janet now, who was asking her to “Look at my neck.” She desperately wanted Naya to talk to that doctor.

Something thoroughly shocking, even to the most seasoned law enforcement officials was found on Elephant Rock and the forensic teams began to gather. One by one they arrived on the scene. Dr. Carroll Prize, “renowned forensic entomologist” leaned over the scene with Agent Leia Bines, a member of the “Child Abduction Rapid Deployment team,” FBI. It was more urgent than ever that Naya reach Dr. Peter through her drawings. The big bad man was waiting to strike again. “Look at my neck.”

This book mesmerized me like no other book has done in some time. It was not a book with twists and turns at every step, but rather one that tugs the reader right along. I didn’t have to be tugged very hard because this book was so superbly crafted I felt like reading into the wee hours of the morning (and I did). If you’re looking for a psychological thriller, this has to be the best game in town!

Quill says: Shut your windows, lock your doors and get ready for a terrifying descent into madness!