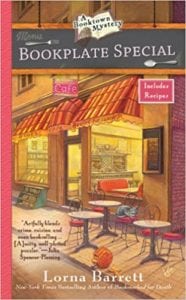 All was quiet in Stoneham, New Hampshire. Well, almost. Tricia Miles hadn’t been so uptight since Zoë Carter was found deader ‘n a doornail plopped on her toilet at her mystery bookstore, “Haven’t Got a Clue.” Before that there was Doris Gleason who was done in by a little carving knife chop job. She seemed to be turning into a professional corpse finder and there was going to be a third one if Pammy Fredericks didn’t get the heck out of her apartment. Normally soft-spoken, she’d just about reached the end of her rope with Fredericks the freeloader and practically screamed, “Get out of my house.” College was one thing, but there was a time to grow up and two weeks with her was more than enough. Out, out, OUT!

Pammy was as welcome as a plantar’s wart, but when she insisted she leave, Tricia began to feel pangs of guilt. Stoneham, New Hampshire was a well-known bookstore mecca and the type of place if you had any business whatsoever, everyone else knew about it. Before the last “out” was shouted, it was heard at the other end of town. Meanwhile, Pammy found employment with Angelica, Tricia’s sister at her café, “Booked for Lunch.” Tricia was even more annoyed when her sister insinuated she had thrown poor Pammy out. Next thing you know…

Tricia stepped out into the alley and guess whose pink Crocs she saw sticking out of a trash cart? “I understand this is not your first encounter with the law here in Stoneham…” At least Captain Grant Baker was a hunk, unlike Sheriff Wendy Adams. This whole thing was enough to make anyone throw up. Why had Pammy been dumpster diving for food? Who were all these “freegans” she was associating with? Why was Pammy trying to blackmail Stuart Paige? Who was smashing all those pumpkins? Who, what, when, why? At least Ginny, her book clerk, thought she lived a charmed life. “I’m divorced, my sister lives next door, and I keep discovering dead bodies. How charmed is that?”

Lorna Barrett is really starting to find her voice in this series. The characters are becoming more fleshed out and I actually felt as if I was getting to know what to expect from some of them. The plot line, although still fitting into the “cozy” genre, was more complicated and there were many more questions to be answered and the whodunit was not as easy to peg. There is one little surprise that was a real stunner and an unexpected twist. Get ready to pop a lot of popcorn, cuddle up under a blanket and spend a little time with Tricia Miles and crew. Ms Barrett, queen of the cozys, has a winner here! The next one up in the Booktown Mysteries series is called Chapter and Hearse and I, for one, can’t wait!

Quill says: If you love cozys, this is one series that was cooking and now is HOT!