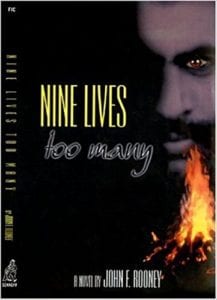 When Delaney begins to piece together the events leading up to the bombing, he discovers security camera footage that identifies the bomber. After he watches the surveillance video showing the man placing the explosives at ground zero, Delaney recalls that he had previously seen the perpetrator while working at FBI headquarters on special assignment.

Curiously, the FBI’s special agent-in-charge, quickly labels the attack a suicide bombing despite Delaney’s protests. Our hero begins to wonder if there is more going on here than meets the eye. Now Delaney must get himself reinstated so he can officially begin working the case.

Denny soon finds salvation in the form of an offer he can’t refuse: the FBI, admitting the bomber survived the blast, wants him to join their team. Delaney is now on the inside of the federal investigation working side-by-side with agents who are the best in the business. What follows are a series of successful terrorist bombings that make the law enforcement officials working the case appear incompetent, and the villain, Felix, seem invincible. The cops are looking for redemption by pressing the investigation and doing whatever it takes to catch the psychopathic killer. Following the trail of the evil “Felix the Cat,” our hero must also battle his own demons, including alcoholism, a failing marriage, and a terminally ill parent.

As an avid fan of the genre, I was eagerly looking forward to reading Nine Lives Too Many. With an interesting storyline and compelling characters, the story moves along briskly. There are, however, places where Rooney’s dialog seems stiff, and he has a penchant for using phrases that are not in the common vernacular. For instance, when a character hangs up his cell phone, Rooney says the call was “deactivated.” The book also suffers from uneven pacing. Just as things are heating up with an exciting chase through midtown Manhattan, Delaney hops on a Delta flight to Fort Lauderdale for an extended visit with his father who has just been diagnosed with advanced colon cancer.

In this era of terrorism and heightened security, Nine Lives Too Many hits home with its timely plot of bombs, FBI agents, and rushing to blame the wrong adversary. If you can forgive the sometimes awkward word choices and plot tangents, then you’re sure to enjoy this thriller.