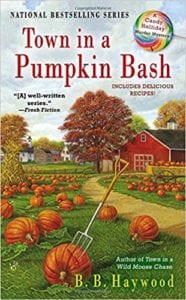 Cape Willington had little to offer once the leaf peepers went home, so Candy Holliday's father talked to Mr. Gumm and asked about the availability of his pumpkin patch, a possible money maker for Candy and Maggie Tremont. They agreed to "work the patch together," and it began to thrive. They were prepping for the Pumpkin Hollow Haunted Hayride, but were planning on meeting up with Sebastian J. Quinn early in the morning. Unexpectedly, he'd asked to rent Sapphire Vine's house. Sapphire, the Blueberry Queen, had been murdered a few years before and ever since then it seemed like she "somehow managed to continue to reach out from the grave." The place was downright haunted and why Quinn wanted to rent it was anyone's guess.

Quinn was a no-show, but everyone was in costume and excited to head out on the haunted hayride. Candy was slated to drive, but when a man named T.J. hopped on board, she tentatively decided to narrate those spooky tales and let Maggie do the driving. Of all things, he want to know about Sapphire's murder and her haunted house. Yup, Candy explained to a budinsky tourist, "her spirit looms over everything that's happened over the past few years." They wouldn't need to dwell on the past when they saw what was under a pile of pumpkins as they approached the fake tombstones.

T.J. scrambled out of the wagon when he saw a man's body eerily sprawled beneath a pile of pumpkins. Candy was immobilized with shock, but soon she realized that Sebastian had indeed showed up. "Something's not right about this, " she said to T.J. and quickly got her wits about her to preserve the scene. Chief of police, Daryl Durr, agreed with her. "It looks a lot more than suspicious, Ms. Holliday." It seemed like Sebastian wasn't the first to die there. The Woman Without a Name had died there twenty years before. There had to be a connection, but the clues would prove to be few and far between. Could she find out what that connection was and find the Pumpkin Patch Killer before he struck again?

Candy Holliday has her work cut out for her when she needs to solve a very unusual murder, as well as a mysterious disappearance. Not only does she have to find out who offed poor Sebastian J. Quinn, but once she finds out who T.J. really is, he sets her off on another direction to find a missing diary. To add to the conundrum, she also wants to find out about the identity of the woman who had been found in the pumpkin patch. This mystery was alive with intrigue, murder, conspiracy, secrets, and lies that made the reading exiting and fun. It's not the first in the series, nor hopefully the last, but definitely is a stand-alone mystery. This is a fun Maine cozy mystery with a creepy blast from the past.