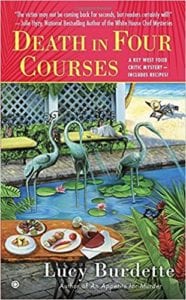 Haley Snow’s little job as the food critic for Key Zest paled in comparison to that of Jonah Barrows, who landed a job as a restaurant critic for that “snooty” Guide Bouchée when he was in his twenties. Her job seemed so declasse she might as well have been covering a hot dog eating contest instead of a literary conference. Jonah was going to be the keynote speaker and to top it all off, Haley had to drag her mother along. She’d just flown in to Key West from New Jersey and was going to stay with Haley’s friends, partners Bill and Eric. It looked like there would be no end to the embarrassment when she began to shush everyone around her and then started in repeating things about Haley she’d much rather not hear. Puh-leeze!

Jonah’s announcement about his tell-all memoir went over as well as stepping on chewed up gum on a hot sidewalk for more than a few of the seminar participants, including the director, Dustin Fredericks. “We professionals cannot abandon this job to the Chowhounds and Yelp Boarders.” Jonah was preaching to the choir, especially with so many world renowned critics in the audience. Many a misplaced star in a review could literally kill a chef or plummet them from fame to an eggs-over-easy line cook. After a brief interlude in the conference and a hurried dash to the ladies room, Haley came out to find someone pushing up daisies in the lily pond.

“I don’t know. He looks dead to me.” The waiter had a point. Jonah had been clobbered over the head with a statue of an egret and doused in a reflecting pool. Detective Nate Bransford, who once declared that Haley was a person of interest when Kristen was murdered, definitely held Haley’s interest. The only problem was that poor Eric had taken her place because he was the last one to have seen Jonah alive. That tell-all announcement sure did rattle some skeletons, but enough to kill a man? “Your beat is food, not murder.” Wally, Haley’s boss had a point, but soon there would be another reason to check into the seminar secrets and that was a body sprawled on the rocks. “One step forward and you and your mother are dead ...” Had Haley found the killer?

This Key West cozy is as delectably refreshing and tangy as a freshly baked slice of key lime pie. Haley was a marvelously interesting sleuth, but her Mom, Janet, really added to the plot. She added a nice humorous twist to the tale when she came out with lines such as “Remember when you’d only eat strained carrots and your skin turned yellow from too much carotene?” Said only as a mother could. The interesting assortment of foodies from the seminar, Yoshe King, Olivia Nethercut, Sigrid Gustafson, and others added even more zest to the plot as we learn about some of their idiosyncrasies. No doubt, I fell in love with Haley and Mom and if you want a spirited cozy whisked with murder, you’re going to love this one!

Quill says: A passel of foodies, a seminar, and a dollop of murder equals one zesty cozy mystery in the Keys!