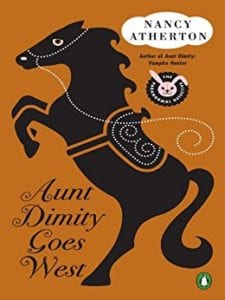 Pack your saddle bags and get ready for a fun ride because Aunt Dimity is heading west; to Bluebird, Colorado to be exact. The twelfth book in Nancy Atherton’s Aunt Dimity series takes the reader along for an entertaining trip to the Colorado Rockies to solve a mystery involving a mine, a small town where rumors fly, and one very cute 21-year-old caretaker.

Aunt Dimity Goes West opens in the tranquil little English village of Finch, where Lori Shepherd lives with her family. It is just six weeks after her last adventure, where Lori was shot in the shoulder by a raving lunatic. Unable to escape her nightmares, Lori’s husband Bill hopes a change of scenery might help. He has reserved a vacation home – a log cabin - owned by a good friend and although he must stay behind to attend to his law practice, Bill is optimistic that the new environment will help his wife recuperate. Lori, the couple’s five-year-old twins, and the boys’ nanny, hop a plane and are soon in Colorado.

Lori and her entourage are met at the airport by Toby, a last-minute replacement for the cabin’s caretaker who unexpectedly quit a few days earlier. What happened? Is something going on in Bluebird? At the cabin? Lori is at first reluctant to accept Toby as the family’s sole custodian but soon, he earns her trust. The “log cabin” which Lori had envisioned as a tiny hut without running water, turns out to be a luxurious mansion. All is going well and Lori’s nightmares have even stopped until rumors of a curse on the house begin to surface. Is there an evil spirit intent on harming Lori or her children rummaging about the house? With the help of Dimity, a loving spectral “aunt,” Lori sets out to discover just what is hiding beneath the floorboards of the house.

Aunt Dimity Goes West is a light-hearted adventure with just the right amount of suspense and charm, mixed together to keep pages turning. It is not surprising that the Aunt Dimity series has proven so popular as Atherton has a knack for telling a slightly silly, somewhat believable but always fun story. Although Aunt Dimity’s appearances were rare until well into the story, and the action was slow to start, once it did, the reader is kept guessing as to the eerie events and whether they’re caused by a curse, a spirit, or simply a maniac. Be sure to try the recipe for Carrie Vyne’s (a minor character in the story) Calico Cookies that appear at the back of the book – they’re delicious!

Quill says: The perfect book for a rainy afternoon.